Many so-called experts completely misunderstand the vital role of the hip flexors in controlling and motivating athletic movement. They miss the complex interrelationship between the hip flexors and the abdominal muscles. So many trainers avoid hip flexion exercises. But that’s a big mistake, according to Coach Greg Glassman. He deplores rampant “superstition, confusion and fraud” and discusses 3 important ab exercises.

In the glute-ham developer sit-up the range of motion is from as far back in hip and back extension as you are comfortable up to where you can touch the pads above the shin and instep. We’ve used this sit-up to teach our athletes how to fully engage the rectus femoris to improve the quality of hip flexion.

In the hollow rock athletes lay face up on the ground with their arms stretched overhead and their legs out straight. They raise their arms and legs about one foot off of the floor and attempt to assume the shape of a rocker on a rocking chair, then gently, slowly, teeter back and forth. A seemingly innocuous little exercise, the hollow rock is a staple of gymnastics conditioning and excruciatingly tough when performed correctly.

The L-sit is little known outside the gymnastics community but may be the most effective ab exercise. The L-sit is performed by supporting the body entirely by the arms and holding the legs straight out in front. Athletes who have developed their L-sit to the point where they can hold it for three minutes subsequently find all other ab work easy. 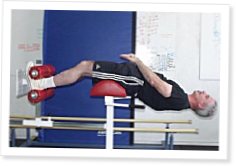 The overhead squat is the ultimate core exercise, the heart of the snatch, and peerless in developing effective athletic movement. This functional gem trains for efficient transfer of… Continue Reading

The CrossFit movements are functional, full-body movements that generate a great deal of power, and virtuosity in these movements requires instruction, practice and refinement. The… Continue Reading

I've found abdominal wheels to be very effective at strenghthening abs. I've also been told they can cause spinal injuries due to the leverage put on the spine. Would you agree?

It is not about "strengthening" the abs, it is about risk versus benefit ratio. It is well proven in the literature that repetitive hyperextension causes spondylolisthesis and facet joint overload.

Anything can injure you if you're not using proper form or if you're just plain doing it wrong.