Metabolic training refers to conditioning exercises intended to increase the storage and delivery of energy for any activity. Generally, all out efforts of two minutes or less are anaerobic while efforts lasting more than several minutes are aerobic. In this article, Coach Greg Glassman writes why the Crossfit approach is superior for getting results.

Ultimately the CrossFit position on metabolic conditioning, or “cardio”, is summed up in two points. One is that anaerobic training can match endurance training for aerobic benefit. Additionally, metabolic training with varying and mixed exercise modalities avoids specificity of adaptation allowing for additional first wave - cardiovascular/respiratory adaptations, and increased functional strength. 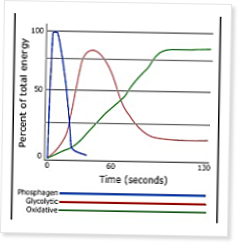 At the Chalkboard: Failure Mechanism

In front of a chalkboard for a discussion on exercise theory, Coach Greg Glassman suggests it’s possible certain muscles of the body can lift loads that can do damage to other parts of… Continue Reading

For the record, my bad attitude towards any established corpus of recovery information stems from several quirks of my intellectual temperament and the nature of my clinical practice. It has been my… Continue Reading

Reading this stuff never gets old. Thanks to the CFJ for making these older articles so easy to access.