The CrossFit movements are functional, full-body movements that generate a great deal of power, and virtuosity in these movements requires instruction, practice and refinement. The movements are tremendously effective for producing fitness, but they are complicated enough that no teaching tools can be ignored.

Direct instruction is, of course, one tool that's available, but the digital revolution has provided many others. Video is often viewed as the best of them, but video can move too quickly to allow perception of nuance. We have learned that a series of still photos is often better than video, but still photos do little do convey the dynamic fluidity of the movements.

The solution was provided by a company called 3cim, which produces high-definition web imaging and compression technology. Series of pictures can be linked together to both isolate specific aspects of the movement and preserve its fluidity, and text overlays allow us to highlight key points of performance.

Presented here are instructional series for the movements we are most often asked about, including the thruster, muscle-up, L pull-up and snatch. Use the Web links to access 3cim files that will allow you to scroll through the movements and better understand how to master them. 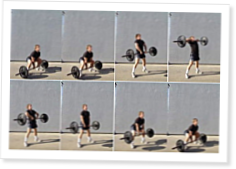 Outside Magazine crowned triathlete Mark Allen "the fittest man on earth." Let’s just assume for a moment that this famous six-time winner of the IronMan Triathlon is… Continue Reading

The CrossFit program is wholly unique in its aims, prescriptions, methodologies, and implementation, writes Coach Greg Glassman in “Understanding CrossFit.”

Greg Glassman you are a true legend!!!