The CrossFit family mourns the recent passing of Dr. Roy Walford, the world’s preeminent longevity researcher. Dr. Walford published over 300 scientific articles on the biology of aging. From his laboratories at U.C.L.A., where he worked for nearly forty years, Dr. Walford’s work centered on extension of life span via caloric restriction.

Dr. Walford’s untimely death at 79 (he’d long and publicly planned for 120) from ALS does not, in the least, challenge the validity or contribution of his scientific work on aging. The suspicion among many researchers that caloric restriction might, as it has in lab animals, extend human life span, should, and will at least in the short term, survive Dr. Walford’s death.

Sadly, we expect Dr. Walford’s shortfall to marshal, somewhere, a case for gluttony. We will honor the Dr.’s life and work by helping keep perspective. We do the same for the late Dr. Atkins when we remind some of his detractors that terminal brain injury from accidental head trauma could not have been realistically prevented by his or any other diet.

The culture we endeavor to nurture within the CrossFit community is focused on practice and results above theory and theory above personality. For us too much of fitness, nutrition, medicine, and health is marketed, associated, promoted, understood, debated, and even recognized in connection to a personality first, a theory second, and clinical practice or efficacy only third. 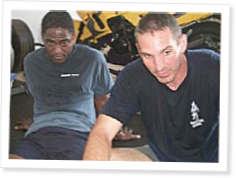 6 Comments on “Why Fitness”

Brilliant article. These are points I've been considering very deeply for some time. From an average CrossFitters experience, essentially my own, the spritual gifts that Coach has pointed in the article have become the best fruit of my labor in addition to improved scores and heavier weight. My life is better because I do this.

This puts into words what I have known since the first time I was able to look back upon myself and realize that I had improved my body and, consequently, my life as a direct result of my own physical effort.

This, along with a few other CFJ articles, should be mandatory reading for all CrossFitters. Just awesome, as usual, Coach.

Without delving too deeply into the realm of emotional hyperbole, I'd like to say that that article was, quite simply, beautiful. Thanks Coach.

For 22 years this is all I've done as a profession. You have put into words our Company philosophy...only better. Thank you for writing this and I would like your permission to post it on our site via a link, for tomorrow's WOD.

CrossFit (and the community) have been been and will be an invaluable tool and gift for us. I really don't think I will ever be able to tell you deeply enough how you guys have affected my life and the direction of our business.

I am excited about y'all coming to Jupiter in July and can't wait to learn more.

I found the review linked to to be the most interesting part of this article (the rest is obvious having seen it all happen to me since crossfit consumed my life) - I was hoping someone out there more plugged into fitness research could direct me to some more recent journal articles concerning the biology of fitness - I'm a postgrad at Rice U working in cancer biology, but in a couple of years would like to find a postdoc in fitness research. Thanks ahead of time, and as always thanks coach.