The clean and jerk and the snatch, the Olympic lifts, present the toughest learning challenge in all of weight training. Absent these lifts, there are no complex movements found in the weight room. By contrast, the average collegiate gymnast has learned hundreds of movements at least as complex, difficult, and nuanced as the clean or snatch. In large part because most weight training is exceedingly simple, learning the Olympic lifts is for too many athletes a shock of frustration and incompetence.

Sadly, many coaches, trainers, and athletes have avoided these movements precisely because of their technical complexity. Ironically, but not surprisingly, the technical complexity of the quick lifts exactly contain the seeds of their worth. They train for, that is, they simultaneously demand and develop strength, power, speed, flexibility, coordination, agility, balance, and accuracy.

When examining the reasons offered for not teaching the Olympic lifts we cannot help but suspect that the lifts’ detractors have no first hand (real) experience with them. We want to see someone, anyone, do a technically sound clean or snatch at any weight and then offer a rationale for the movement’s restricted applicability. Were they dangerous or inappropriate for any particular population, we’d find coaches intimate with the lifts articulating the nature of their inappropriateness. We do not.

At CrossFit everyone learns the Olympic lifts - that’s right, everyone. 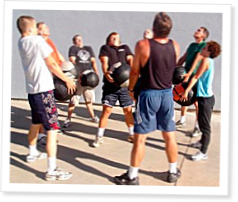