Every manner of pull-up has its diehard fans. Wide and narrow grip, single and double suspension points, wide handle, rotating bar, slow, and behind the head all have their staunch supporters.

The default CrossFit pull-up, however - a violent, kipping, "anyhow" pull-up - has few supporters even among pull-up connoisseurs. Ours has always been the "cheating" pull-up.

Kipping comes in a myriad of styles, and each athlete has a signature kip, but in its most elegant form the kip is a transference of movement first generated in the horizontal plane, where it comes cheap and easy, to the vertical plane, where momentum and a perfectly timed pull from the back launch the athlete forcefully upward.

This "cheat" derives from a powerful and athletic reversal of hip direction - like that of the clean and the snatch - and expands the primary movers from just the back and arms down through the torso and hip to include the power zone. Far from being a cheat, kipping is a gateway skill with functional utility on the rings, parallel bars, high bar, and floor (the quickest way to get to your feet). Where most athletic communities avoid the kip, we go to great lengths to teach and learn it. 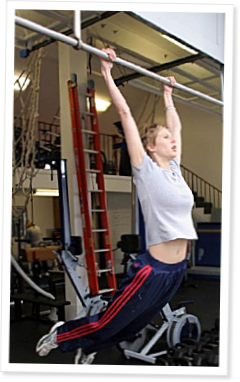 Interesting, intelligent, useful information about the pull-up is not easy to come by. Here’s an interesting article we found from Clarence Bass’ site on Pavel’s theory of “greasing the groove” (… Continue Reading

The overhead squat is the ultimate core exercise, the heart of the snatch, and peerless in developing effective athletic movement. This functional gem trains for efficient transfer of… Continue Reading

Kipping vs Non Kipping is a class war between the marines and navy. I (a navy man) have always subscribed to non kipping. And I continue to promote back muscle isloation and arm recruitment to increase reps. Biomechancially, (please correct me) I do not see kipping as a way of scultping either of those muscle groups. But it sure is one hell of an overall body work out (not to exclude cardiovascular). I'm trying to unlearn my non kipping ways. And I look forward to execiting 35 - 40 kipping pull ups. "Live Well"

I have a PT test which requires me to do as many strict pull-ups as I can nonstop. Would it not be more beneficial for me to train doing strict pull-ups?

I get way more of a burn in the forearms and more of a grip workout with kipping also. And they are way more fun! Each style has it's place though.