Over the past six years our school’s powerlifting team has been quite successful. We have had about thirty athletes advance to state championship contests and eight have won first or second place. Three have gone on to win national championships, and two of those have made this year’s U.S. World Team and will represent the United States at the IPF Sub-Junior (18 years or less) World Championships in September.

Several months ago I came across a link to CrossFit.com, and, after sifting through the site for a while, I was hooked. As someone who appreciates the value of hard work, I knew I had to find a way to incorporate this type of training and conditioning into my team’s regimen. I will first describe our existing strength training system and then show how we have incorporated CrossFit methodologies to take the program to an even higher level. 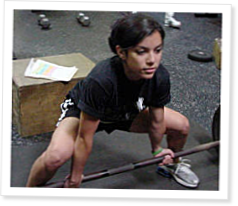 Train the same way for too long and you’ll experience accommodation, which will reveal itself in poor performance. For Louie Simmons of Westside Barbell, the conjugate system offers a way to avoid… Continue Reading

By Jeff Martin and Darrell White

How many times have we read on the CrossFit.com comments about people who think they need to do a separate strength program to get better at CrossFit? While we agree that increased… Continue Reading

This article was absolutely outstanding! Thank you, Jason!