Since January, I've been on thirty-nine flights. The madness started with a writing assignment to cover cat skiing in southern British Columbia: ten days. Three weeks later, I was called to hop a few planes to a Canadian mountain range called the Monashees for a backcountry skiing photo shoot for Mountain Hardwear with a few other athletes: nine days. Two weeks later, I left on a month-long assignment for National Geographic Adventure in northern Norway, where I retraced the steps of a WWII escapee on skis across Lapland, about ten degrees north of the Arctic Circle: twenty-nine days. Ten days at home, then I jetted to Nepal for a month to write dispatches for MSN.com on Ed Viesturs's historic mountaineering ascent of Annapurna, making him the first American to climb all fourteen of the world's 8,000-meter peaks: thirty days. No rest for the weary, but I like it that way. I like to pack it all in; it feels more efficient that way, like I’m getting things done. Unfortunately, with that "efficiency" that I fiendishly suck energy to achieve, thirty-nine flights in no way augments my level of fitness. CrossFit does. 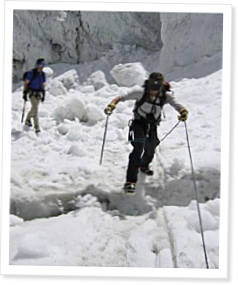 The world’s best swimmers move through the water with grace, economy, and flow, while novices are awkward, clumsy, and inefficient. But the rest of us can learn to swim… Continue Reading

2 Comments on “CrossFit to Go”

Wow... what an interesting job. I found it funny that work can equal hours of sitting around no matter where you are. I would miss being home if I had to travel that much... but it still sounds amazing. :)

Can I have your job please?