The GHD sit-up was once a gym staple. In the gym today only rarely will someone be found doing other than back extensions on the GHD. In no small measure the decline of the GHD or roman chair sit-up coincided with the advent of the crunch. The crunch came to fashion on warnings and claims in popular media of the traditional sit-up’s destructive impact on the back.

It was argued that the GHD style sit-up's primary movers were the hip flexors and not the abs and consequently this sit-up, and sit-ups like it, were actually not good abdominal exercises. It was further argued that recruiting the hip flexors to lift the torso was destructive to the lumbar spine. 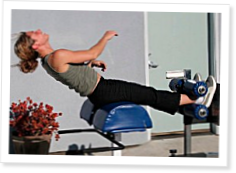 We see the… Continue Reading

At CrossFit we swing the kettlebell overhead while the kettlebell community swings to eye or shoulder height. No matter how many times we’re admonished for our excessive swing we proceed unabated? What… Continue Reading

6 Comments on “The Glute-Ham Developer Situp”

but good strong hip flexors are what gives you the "V"

I can relate to the pain of GHD situps. First time of doing 100 repetitions a couple months ago took me out of play for a few days.

I am a new cross fitter but a decent athlete. I am feeling huge discomfort in my lower back at the extension part of this movement. I feel as if my back is going to snap at my hips and I am not going much below prone table top position. The range of motion does not seem to be there. Any suggestions for beginners who really want to get this.

I am a new cross fitter (age 57) and working diligently to build ab strength as well as hipflexor/spine stablization. I am 1 week away from taking a PAT for the local Sheriff's Ofc reserves. (I have over the years caused compression in the lumbar spine and had LBP for over 40 years due to improper lifting in the construction trades. I have improved dramatically however I seem to fatigue rapidly doing "full extension PU's" the way I am forced to do them for the test (hands interlocked behind the head and feet anchored, knees 90degrees. max reps in a minute. Like Cathy Bell, the pain comes on quickly, (especially when exercise is first of the set.
Any comment on best WO to increase ROM and strength would be helpful
Thanks,

I am new to this blog and recently cretified level 1. The GHD sit up is of concern and interest to me as a manual therapist and functional anatomy teacher. My knee jerk it is a dangerous movement. It is hard to believe the last post here was June '08. Anyone?