Skill Transfer Exercises for the Snatch

In our August issue we explored the overhead squat, which we billed as "the ultimate core exercise, the heart of the snatch, and peerless in developing effective athletic movement." This month we introduce three skill-transfer exercises based on the overhead squat and commonly used by weightlifters to develop the snatch.

Mike is the current U.S. Pan American Games coach, and Sage is a nationally competing junior champion. The three exercises are known as the pressing snatch balance, the heaving snatch balance, and the snatch balance. Each essentially demands successively greater dynamics and athleticism to reach, hold, and control the catch position of the snatch--which is, in fact, the bottom of the overhead squat.

Each of the three snatch balance exercises begins with the bar in a racked position on the upper back, as for the back squat. Starting with bar on the back, rather than in the front rack position, gives the athlete greater control and easier access to a line of action that is truly upward and not derivative. 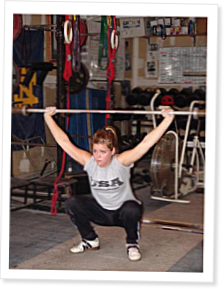 The Scoop & The Second Pull

Olympic weightlifters have been found to have higher vertical leaps and quicker 25-meter sprint times than any other athletes, including Olympic high-jumpers and sprinters.

The technical explanation for… Continue Reading

As a spectator at the 2011 Reebok CrossFit Games, I couldn’t keep the coach in me from slipping out during… Continue Reading