The slow lifts—the squat, the press, the deadlift and the bench press—form the basis of any effective program to improve strength, writes Mark Rippetoe, owner of The Wichita Falls Athletic Club and Crossfit Wichita Falls and co-author of Starting Strength.

Strength means way more than the ability to generate force against a resistance. It has always meant capability. It has always been the means by which people accomplished things.

The squat, press, deadlift, and bench press all incorporate the isometric and dynamic components of the quick lifts—the snatch and the clean and jerk—because they are multijoint movements that involve lots of muscles doing lots of things during the movement. The slow lifts can all be done fast. In contrast, the quick (i.e. Olympic) lifts cannot be done slow, and are always used to train power. They cannot be used as strength exercises, since their execution requires a high bar velocity: a slow snatch will not rack; a slow clean is a deadlift.

The slow lifts work all the muscles and joints in the body, they simulate normal human movement patterns, and they produce strength appropriate to all uses of the muscles and joints. They can be trained fast or slow, done with a minimum of equipment, and form important components of the quick lifts. They affect the body in a systemic way, producing sufficient stress that a hormonal response is produced to facilitate recovery and adaptation.

The slow lifts are very hard. They produce psychological toughness when trained correctly. And absolutely no one has ever gotten brutally, ungodly strong without doing them. 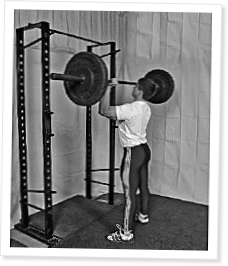 The bench press is the best exercise for absolute strength in the upper body. So says Mark Rippetoe of The Wichita Falls Athletic Club/CrossFIt Wichita in part 4… Continue Reading

The power clean is critical to sports performance training because it is a scalable way to develop power, writes Mark Rippetoe, of The Wichita Falls Athletic Club/CrossFit… Continue Reading

2 Comments on “The Slow Lifts”

calling the squat, deadlift, and bench press "slow lifts" could be misleading to a beginner. Not only on on 1 rep max attempts but also on lighter sets you should be exploding, moving the weight as quickly as you can through the concentric portion of the lift.If you are not then not only are you missing out on moving more weight on your 1 rep max, you are also missing out on developing explosive speed and power that would carry over to any other sport

I agree. Slow may be the case with heavier weight though explosivness is a huge portion when it comes to strength.