If we use the term “press” specifically in reference to barbell exercise, we mean a standing overhead press with a bar in both hands. Anything that modifies this movement must be described with a qualifying term, such as a strict “military press” or a “push press” that is done with the help of the legs and hips.

We will not perform a strict military press, but it will be stricter than an old-style Olympic weightlifting press during which torso movement got so out of hand that the lift was dropped from the sport entirely.

The grip will be just outside the shoulders, wide enough that the index fingers clear the deltoids, not so wide that the arms drive out at an angle on the way up. The bar should rest on your shoulders with your elbows slightly in front of the bar. Your stance will be comfortable and wide, wider than a pulling stance and maybe almost as wide as a squat stance. Full details can be found in my book Starting Strength. The press is hard. You won’t be able to press what you can bench. You have to support with your whole body what the bench supports when you lie down to press. So you’re doing all the work instead of letting the bench do some of it. You’re supporting, balancing, and manhandling the whole load. This is how strength was, and is, built. 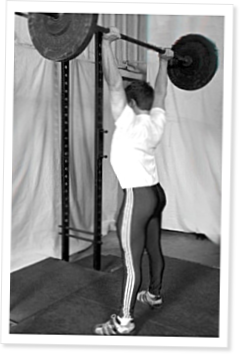 Contrary to what you might hear from some medical professionals, going deep in full squats is a spectacularly good idea, writes Coach Mark Rippetoe, co-author of Starting Strength and… Continue Reading

Active Lumbar in the Squat

This footage is taken from his Basic Barbell Certification… Continue Reading

I'm old enough to remember photos of Abbye Stockton in the old Strength and Health mags, and she was a magnificent example of fit, healthy, and natural looking feminity. Thank you for remembering one of heroines of lifting.