A Concept for Functional Fitness by USMC - CrossFit Journal

A Concept for Functional Fitness

"The United States Marine Corps has for many years taken pride in the level of physical fitness of its members. Physical fitness has been associated with professional performance, especially performance in combat. This association is correct because combat is the factor that should matter most to a fighting organization. However, the Marine Corps' Physical Fitness Program, as it is currently focused and structured, does not adequately prepare Marines for combat. In fact, other than the inherent ingenuity that some forward-thinking commanders evidence, the focus of the program seems to have only a mediocre combat focus at best. Further, most units find it difficult to follow the program as it stands, but even if the units did, they would still find that their people were insufficiently prepared for the physical rigors of combat.

Many of the unknown (and unknowable) factors reinforce an argument that Marines need a general purpose sort of fitness--a fitness that is based on the functions of combat operations. " 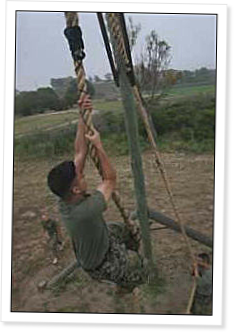 Address to the Warrior Transition Batallion

After getting caught with a suitcase of cocaine in November 2011, Karl Thorson was sentenced to 30 months in prison. From a penitentiary in California, he talks about finding fitness behind… Continue Reading

Being a Blue Angel

This article uses lists, charts, and photographs to describe the CrossFit Austere AOFP, a program that provides soldiers with an operational fitness routine that will produce the… Continue Reading

As a Blue Angels pilot, Lt. Cmdr. John Hiltz withstands unique aviation conditions while flying his aircraft as fast as 800 miles per hour for up to 45 minutes at a time.

3 Comments on “A Concept for Functional Fitness”

The Marine Corps is half heartedly going with this concept. They will not let go of the PFT in short and shoes with a three mile run. Why not make the run 1.5 miles in boots in utes with the rest of the CFT that is to be implemented.

Foremost, you have to understand that a complete overhaul of any program that exists in the Marine Corps takes some time as policies and minds will need to change and evolve. The PFT is still a good tool and will still be used in addition to new, mission-based tests. The focus, as stated in the article, is not to improve the PFT but the Marine and his overall fitness level. As a Marine, I appreciate the changes being made and understand the growing pains of a new program being fielded to the warfighters. My involvement with CrossFit and kettle bell training, introduced to me by the Force Recon Marines, has helped me increase my "functional fitness" level dramatically, but my PFT score has also improved.

I wish that this type of exercise (Xfit)had been around when I was in the Corps. I for one dreaded the super long runs but loved the "combat" exercises (i.e obstacle courses, etc). Now that I'm out of the Corps, I can't wait sometimes for my next Crossfit workout.

I agree with David that this is definitely going to take a serious amount of time to implement in the Corps. Tradition plays a huge role in the USMC and introductions or suggestions of change, from my experience, doesn't come easy.

At least this is a step in the right direction. Once you can prove its better it will definitely start the ball rolling. Just look at the move to MCMAP from the old standard of LINE training.