A dream gym. That is what Big John McCarthy opened earlier this year in Valencia, CA. Opening a gym had long been a thought in John McCarthy’s mind, and in March of 2006, at the urgings of close friends and his wife, he decided to go for it. Just six months later Big John McCarthy's Ultimate Training Academy opened its doors.

For a mixed martial artist seeking a gym, the Ultimate Training Academy has everything (including new CF affiliate CrossFit Valencia). When McCarthy's wife first discovered the warehouse space it was dirty cobweb-ridden space that had been left vacant for a year and a half. Today the gym is an impressive sight and a veritable martial arts playground.

The facility itself is 14,000 square feet of floor space, with an additional 2,000-square-foot mezzanine overlooking the training area. With thirty foot ceilings, the atmosphere is very open and inviting. A full-sized Octagon and a 24' × 24' Pride-sized ring are the focal points of the gym. These are flanked by a 32' × 16' space holding approximately twenty heavy bags. Beyond this is a 3,100-square-foot mat area. In addition, there are two 400-square-foot matted rooms for private training. A 1,500-square-foot free weight area sits at the back of expansive space below the mezzanine, and yet another area holds stationary bikes and rowing machines. 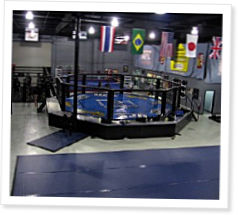 Just a couple of months ago, in September 2007, Valerie Worthington stood on top of a podium in Turkey, accepting the gold medal for the Grappling World Championships. She was… Continue Reading

In boxing, when two fighters get in close to each other and lock up, the referee stops the fight and breaks them up. In other fighting arts, this position is… Continue Reading

This is truely a sweet gym. If you want to see more of this gym, watch Big John do a walk through at www.fistfirstfighting.com. Just click on "Featured Gyms" at the top. Its the 5th video from the top in the list.