Up until now the focus of our dumbbell work has been primarily on the slow lifts. These are essential to building foundational strength and should always be in your training movement pool. As you have seen, for cost effectiveness the dumbbell has no peer as a strength and conditioning tool. There is a point, though, where the training must move to the next level. That level is training for power. From my perspective there is no quality more coveted in athletics than power--the ability to move an object (or the body) through space in a short time. I train power with dumbbells in a number of different ways, but my favorite is the dumbbell snatch. In this article I'll cover three simple yet productive variations: the muscle snatch, the hang power snatch, and the deck snatch.

The low-tech dumbbell snatch is much easier than a barbell snatch. In fact, the two movements are similar in only three ways:
1. The load starts on the deck or in a hang position.
2. The load travels close to the body from the start position to overhead in a single move.
3. The load finishes extended over the head with locked-out arms and active shoulders.

The barbell snatch requires a much greater degree of kinesthetic awareness. The barbell length and mass at either end moving at a the speed of blur make it akin to steering a fire truck verses a Yugo. The primary movers for the dumbbell snatch are the ankle, knee, hip, and trunk extensors (a.k.a. the "power zone") and the shoulder flexors, scapular elevators, and shoulder stabilizers. However, the dumbbell snatch should not be implemented with the idea of targeting muscles but rather to focus on a specific performance- based goal--in this case, ground-based explosiveness of the ankle, knee, and hip. 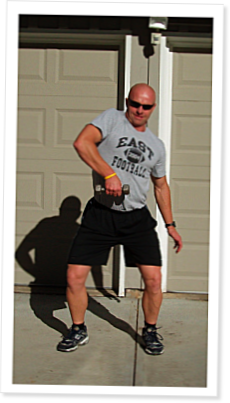 Dumbbells From the Plank: How to Energize your Push-up Training Part 1

For those of you who I have not had the privilege of meeting or speaking with in the past, I'm known around the CrossFit community as the dumbbell coach. My friend Greg Glassman… Continue Reading

Dr. Tabata and the Dumbbell

As you look everywhere in the sporting world you see athletes performing sports with a rotational component. In sports such as baseball, tennis, and golf, the athlete must transfer… Continue Reading

In 1996, Dr. Izumi Tabata published the results of a study demonstrating, with speed skaters, that the aerobic and anaerobic pathways could be trained simultaneously (Medicine and Science in Sports and… Continue Reading