The Myth of the Fat-Burning Zone

In last month's CrossFit Journal, I said that we must always focus on performance when assessing fitness. Specifically, I argued that body fat measurement not only is futile (from an accuracy standpoint) but, more importantly, is irrelevant to athletes focused on what they can do rather than how they look. That said, fat loss is still a major and valid concern for many trainees out there, and the fitness industry is full of schemes and strategies for burning body fat.

One of these supposedly scientific nuggets of accepted "wisdom" is the belief, espoused by many personal trainers and reflected in the preset programs on most cardio machines, that the best way to lose fat is to work at a moderate intensity. A version of the graph above appears on the walls of innumerable gyms and training studios across the United States and Canada, graphically illustrating the supposedly "right" exercise intensity (as a percentage of an individual's mathematically estimated maximum heart rate) for maximizing fat loss. But it is not an accurate representation of the true picture. oxygen per min) will burn a greater percentage of fat than when working at the higher intensity. 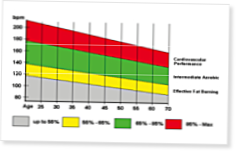 This month I want to discuss the energy balance equation in relation to diet and CrossFit training. Part of my motivation for this comes from an interview with Gary Taubes in which he makes… Continue Reading

Nicole Carroll writes of her struggles with implementing the Zone Diet in, “Getting Off The Crack.” At first Nicole thought she was starving and wouldn’t survive. But she… Continue Reading

3 Comments on “The Myth of the Fat-Burning Zone”

I think the problem is that you are assumming the same VO2 consumption over the course of the 30 minutes...

the 2.43 and 1.96 kcal / litre of VO2 rates given in the charts means that as you work at the 50%max and 70% max for every litre of VO2 consumed you can expect to consume that much energy.

the difference, and the reason for your confusion is the increased overall VO2 consumption in the 70%max versus the 50% max which makes the difference in the total amount of kcal burned.

Hi Jared, I perfectly understand the concept of burning more fat at 70% vs 50% over the same amount of time. My question is, if an average crossfit workout is say 15-20 minutes how can it burn more fat calories than a usual one hour work out at the gym.