While kicks to an opponent's head and one-punch knockouts might make for great highlight reels, less dramatic-looking punches to the body can drop an opponent with stunning pain. A memorable example of this in boxing is the 200px4 Bernard Hopkins vs. Oscar de la Hoya match. Nine rounds into the fight, Hopkins landed a devastating blow to de la Hoya's side that dropped him and left him pounding on the canvas, unable to stand.

In last month's article on the left hook, I talked about the three distances between opponents--long, middle, and tight. There are also multiple levels from which a fighter can throw strikes. In boxing, a fighter can work the head and body. In kickboxing or Mixed Martial Arts, a fighter can target the head, body, and legs.

In this month's article, part three of a four- part series on striking, we'll look at the middle level of striking--to the body. Again this month, boxer and kickboxer Bridgett "Baby Doll" Riley demonstrates the moves in the photographs. 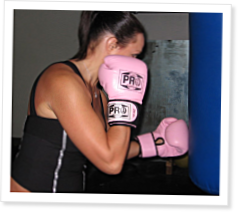 The Jab and Right Cross

When most people think of martial arts, they think of the striking arts--karate, kickboxing, Muay Thai, Tae Kwon Do, etc. As children we instinctively resort to throwing punches to… Continue Reading