From the Snatch to the Clean by Mike Burgener, with Tony Budding - CrossFit Journal

From the Snatch to the Clean

By Mike Burgener, with Tony Budding

Over the past few months, we've taken you through a series of exercises designed to teach you the full squat snatch. This month, we're introducing the clean. This ordering was intentional. Anyone who can perform the snatch properly can perform the clean properly within a few quick steps. The opposite is not true. There are many folks who can clean properly who never learned (or can't easily learn) the snatch.

Success in all the Olympic lifts is based primarily on a single simple concept: generate momentum and elevation on the barbell (or whatever object is being moved). This momentum is generated by a violent vertical extension of the legs and hips. The exercises covered in the previous months' articles detail the proper development of this extension. The mechanics of the first and second pulls are identical for the snatch and the clean. There are two main differences between the two lifts: the width of the grip on the barbell and the receiving position of the barbell. The clean grip is noticeably narrower than the snatch (see CrossFit Journal issue 52), and the receiving position is the front rack position instead of overhead. 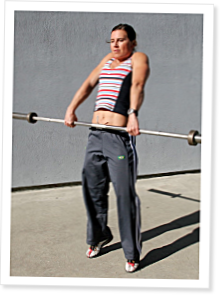 The shortest distance between two points is a straight line—which is also often the quickest route to a missed snatch.

In snatching, you don’t want a perfectly vertical bar path but… Continue Reading

Everyone who ever set out to… Continue Reading

Bill Starr explains how you can use special drills and movements to fine-tune your snatch and break your PR.