Despite its place as a key element in Mixed Martial Arts, wrestling is frequently not prioritized by fighters learning the trade. Younger fighters often begin primarily as jiu- jitsu practitioners or kickboxers and later add wrestling in when they decide to transition to MMA. The fighters who come from wrestling backgrounds, however, have proven themselves dominant in the sport throughout its history so far--from Mark Coleman and Matt Lindland to Matt Hughes and Sean Sherk.

This month's article is the second of two featuring Pride welterweight and middleweight champion Dan Henderson. Henderson is known for his vicious overhand right, but prior to his MMA career, he was a highly decorated wrestler. Dan began wrestling at the age of five and went on to become a member of two Olympic teams. Last month I spent a day at Henderson's Team Quest gym in Temecula, California, and he shared a couple of his wrestling techniques. 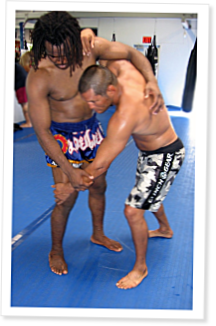 For this month's article I traveled to Temecula, California, to spend a day with Dan Henderson and his fighters at Team Quest. Dan recently achieved the historic feat of… Continue Reading

Just a couple of months ago, in September 2007, Valerie Worthington stood on top of a podium in Turkey, accepting the gold medal for the Grappling World Championships. She was… Continue Reading