Bad form is bad in every way. Citing specific examples from lifts, Mark Rippetoe co-author of Starting Strength and owner of Wichita Falls Athletic Club/CrossFit Wichita Falls, writes that what constitutes bad form is not a matter of opinion.

Bad form occurs when a movement pattern is executed inefficiently. The bar is moved by incorrect biomechanics. Instead of all the muscles in the system making their anatomically efficient contribution to the loaded movement, some muscles do more than they are supposed to and some do less.

Good form (or technique, or kinematics, or whatever you’d like to call it) should depend on the logic of a dispassionate analysis of the body-and- barbell system in the motion required by the exercise. The exercise is chosen to work a particular movement pattern normal to the human skeleton. The bar has a certain path it most efficiently travels through space for the exercise. The skeleton must move in ways defined by its segment lengths and articulation points to enable this bar path, and the muscles must move the skeleton exactly this way. Anything that deviates from this is bad form.

It’s never an advantage to move a load inefficiently. It is usually just learned wrong through a lack of feedback at a crucial time in the learning process. Or sometimes it’s form creep, bad technique acquired so gradually that it is never perceived as wrong until someone else does you the favor of pointing it out.

Good form is not arbitrary, and its purpose is not aesthetics. It is based on a logical analysis of the relevant mechanics, what works and what doesn’t. 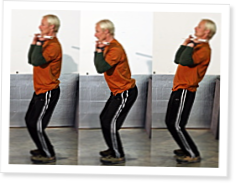 The power clean is critical to sports performance training because it is a scalable way to develop power, writes Mark Rippetoe, of The Wichita Falls Athletic Club/CrossFit… Continue Reading

The slow lifts—the squat, the press, the deadlift and the bench press—form the basis of any effective program to improve strength, writes Mark Rippetoe, owner of The Wichita Falls… Continue Reading

The bench press is the best exercise for absolute strength in the upper body. So says Mark Rippetoe of The Wichita Falls Athletic Club/CrossFIt Wichita in part 4… Continue Reading

This should really be a mandatory read for every single high school/college strength and conditioning coach. Rip provides credibility to lifting with good form that skinny people like me will never get - and rightfully so I guess. I actually wrote a post for our affiliate that echos Rip's main points.