Just a couple of months ago, in September 2007, Valerie Worthington stood on top of a podium in Turkey, accepting the gold medal for the Grappling World Championships. She was there representing the United States and joining her teammates in their sweep of the gold medals in all nine weight classes.

A little over one year earlier, in June of 2006, Valerie had stood in her empty condo in Chicago, finalizing its sale and officially making herself homeless. It was the beginning of what was intended to be a three-month trip around the country to train in Brazilian jiu-jitsu. With the money from her condo, she intended to buy a car, pack up her remaining belongings, and hit the road.

Like many young professionals, Valerie reached a point in her life where she realized she had the car, the home, the job, and everything she was "supposed" to have, but it no longer felt satisfying. A graduate of Dartmouth and Michigan State University, Valerie was putting her doctorate in educational psychology to use working with the state of Illinois and an education corporation. Outside of work she had run marathons, trained in Muay Thai, and finally settled into training Brazilian jiu-jitsu with Carlson Gracie and Carlson Gracie, Jr., eventually earning her purple belt. 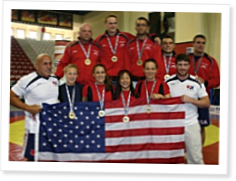 The Muay Thai clinch is a dangerous position. It presents a variety of offensive opportunities in the form of punches, knees, and elbows, and it can quickly lead to a… Continue Reading