The human psyche is a very powerful thing. This same psyche is responsible both for very limiting, self-defeating thoughts and also for strong, self-empowering thoughts that enable us to accomplish great things. For example, how many people believe they can run a marathon, 50 kilometers, or even 100px miles? How about squatting 500px pounds, or even 100px0 pounds? Can you do a 10K in less than 40 minutes? If your answer is, "I could never do any of those things," you should stop reading now. You just might not have the psychological freedom to understand this article.

I come from a power sports background where I excelled as a youth and teenager in short- course swimming and water polo. In my early twenties, I was into powerlifting, but I wrecked my back with a poorly done deadlift set, which didn't allow me to do anything for several months after. week in swimming, 100px+ miles in biking, and 30+ miles in running. I was doing zero strength training-- after all, I thought strength training had nothing to do with what I was doing. I was greatly mistaken! As it turned out, during the race I was passed by several rather obese individuals, who seemed by the looks of things to be very unfit. I was humbled, to say the least, but also motivated unlike any other time in my life.

I climbed up the ranks of the triathlon world shortly thereafter with the completion of an Olympic-distance race, and then a half-Ironman, but I didn't stop until I completed Ironman Canada. This was a great race, and I was thankful to finish. The training, however, was incredibly time-consuming because it was before I knew better so it was purely oxidative and overdone. 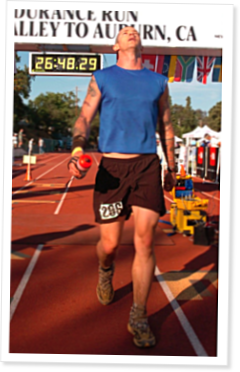 The days of long, slow distance work are over—at least for anyone who’s discovered CrossFit. With the CrossFit Endurance program, distance athletes are suddenly finding success without the… Continue Reading

Chris Michelmore is a busy man. Not only is he the head coach at CrossFit Moxie in San Jose, Calif., but he also works as the San Jose State women’s swimming and diving assistant… Continue Reading

1 Comment on “The New World Order for Endurance Training”

I love to see these types of articles on the journal...! I was a couch potatoe triathlete before I found crossfit... Every race I've done since I started CF'ing, I smashed my time on. My first IM was 15:49.... I know I can crush that with the training that I get with Fury...