Training the Front Lever on Rings

The front lever is one of the basic strength holds on rings that is most attainable by a non-gymnast. It is an excellent exercise for developing a strong core and powerful pulling muscles. The front lever is also a good example of how gymnasts develop their impressive levels of strength without lifting weights (and it's very popular with rock climbers, as well). Instead of lifting progressively heavier weights to increase their strength, gymnasts work through progressions where they manipulate 1) leverage, 2) range of motion, or 3) momentum. The manipulation of leverage is a pretty well-known kind of progression; the other two are a bit less commonly known but still very useful.

The front lever involves holding your body in a rigid plank in a horizontal position under the rings, with straight arms and your body perfectly parallel to the ground. To "hit" the move in competition, gymnasts are required to hold it for a minimum of two seconds. Deductions are taken if there is any bend in the arms, if the body is not level to the ground, or if the line of the body is not straight. In gymnastics, all moves are assigned a grade from A to F in terms of difficulty. The muscle-up used to be an A-level skill, but it was recently demoted to zero value. The iron cross is a B-level skill. As difficult as it is, the front lever is only an A-level skill. Don't pass up the front lever because of its "easy" rating though. 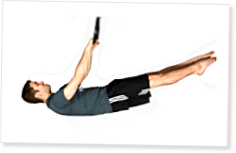 Applications of the Support on Rings

In my last article (issue 58), I discussed the ring row. It is an excellent horizontal pulling exercise and great for correcting muscle imbalances common in a lot of lifters… Continue Reading

Last month I covered the support position on rings in significant detail. This month, we're going to build on that foundation and look at applications of the support… Continue Reading

Scaling Up CrossFit Workouts with Rings

In my last article (CrossFit Journal 67, March 2008), I talked about ways to scale down CrossFit workouts for beginners by using rings. This month we will be scaling up the… Continue Reading

The ring row is known by many names, including body row, horizontal row, and reverse push-up. It is a valuable movement to have in your toolbox, as it provides a functional and… Continue Reading