Last month's article covered the story of world-champion grappler Valerie Worthington. This month, Valerie demonstrates the first of three jiu-jitsu techniques we will be featuring. Valerie has trained extensively in both gi (wearing the traditional kimono) and nogi grappling techniques and has chosen a few of her favorites to share.

This month's move, the gi guard pass, begins with Valerie in Andy's guard (photos 1 and 2). Although to the layman it might appear that Andy is at a disadvantage, being on his back, he can actually mount numerous offensive movements from this position. By keeping his legs locked around Valerie, he can control her movements and keep her on the defensive. He also has the ability to set up chokes and arm locks.

Andy will keep the advantage as long as he can maintain his guard, meaning keeping his legs around Valerie. If she is able to pass his guard (escape from the leg wrap), then the tables will be turned and she will be able to achieve half-guard, side mount, or even a full mount. All of these are offensive positions.

Even though Valerie is at the disadvantage in Andy's guard, there are things she can do to maintain good form to assist her. She sits straight up, with good upright posture, and creates a balanced base with her hips and legs underneath her. To keep Andy's offense at bay, she is posting her hands into his solar plexus. With her left hand she grips the sleeve of his right arm, controlling his movement. In her right hand, she grips his gi collar and keeps her arm straight.

Becca Borawski, CSCS, teaches and trains at Petranek Fitness/CrossFit Los Angeles in Santa Monica. She has a master's degree in film from the University of Southern California and a background in martial arts training. She has blended these skills together to produce DVDs and build websites for professional fighters. Her main job is as the music editor on the TV show Scrubs and she currently trains jiu-jitsu under Eddie Bravo at 10th Planet Jiu-Jitsu in Hollywood.

Valerie Worthington earned her Brazilian jiu-jitsu purple belt from Carlson Gracie and Carlson Gracie, Jr. She currently trains at the New Breed Academy in California. A dedicated member of Petranek Fitness/CrossFit Los Angeles, Valerie was a gold medalist at the 2007 World Grappling Championships in Turkey. 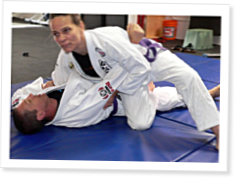 While kicks to an opponent's head and one-punch knockouts might make for great highlight reels, less dramatic-looking punches to the body can drop an opponent with stunning… Continue Reading

The Jab and Right Cross

One of the most frequent topics of conversation I seem to engage in with fellow CrossFitters is about getting started in Brazilian jiujitsu. People want to know what to expect, how… Continue Reading

When most people think of martial arts, they think of the striking arts--karate, kickboxing, Muay Thai, Tae Kwon Do, etc. As children we instinctively resort to throwing punches to… Continue Reading