Why a 10K WOD? by Tony Leyland - CrossFit Journal

I had planned to follow on from my November CrossFit Journal article on spine mechanics for lifters by discussing injury potential due to repetitive loading. In the November article I talked about the dangers of exceeding the shear strength of the spine with poor lifting form. However, injuries often occur in fitness programs due to low-force cyclic loading rather than peak loading. Then, in October, something happened on CrossFit.com that provided the perfect context for my points. On October 16, 2007, the Workout of the Day (WOD) was "Run 10K."

The comments contained a few of the usual complaints from folks who dislike running, but nothing unusual for this WOD. Just three days later, on October 19, the WOD was "Run 10K"! The first five posts to Comments will give you an indication of the general response:
1. Huh? Really? 3,2,1,....
2. Again?
3. Again...seriously? Is there a methodology to this? Is this a mistake?
4. You'd think it was April 1st.
5. Is it Groundhog Day?

Many who posted comments were surprised, as the posts above indicate, and there were a few more complaints than usual, but this post from RoyG caught my interest. How does a 10k run fit in with the CrossFit philosophy?

Tony Leyland is Senior Lecturer at the School of Kinesiology, Simon Fraser University, in Vancouver, Canada. He has taught at the university level for 24 years and has been heavily involved in competitive sports such as soccer, tennis, squash, and rugby as both an athlete and a coach for over 40 years. He is a professional member of the National Strength and Conditioning Association, a Canadian National B-licensed soccer coach, and a level-1 CrossFit trainer. 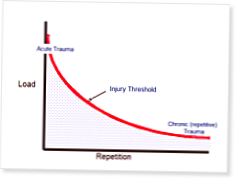 Rest and Recovery in Interval-Based Exercise

Why You Should Sprint Train

Whenever the Workout of the Day on CrossFit.com requires rest periods of unspecified duration between exercise bouts, there are always many questions about it on the comments… Continue Reading

Last month I talked about rest periods during interval training and said I would discuss high-intensity sprint and peak power workouts further. One of the things I talked about is the… Continue Reading

Props and agree that being able to run a moderately long distance whenever necessary is a useful tool to have in one's fitness arsenal, though I'd question whether doing a 10K or even a 5 miler a few times a year will do much to help. It's just not enough to build up any tolerance or capacity in this area. Even if minor injuries like muscle pulls and shin splints don't occur, the fatigue can be substantial and impact training for several days.

Personally I would rather see CFers seeking to develop and maintain a decent moderate distance running ability to simply run 20-30 minutes about 2x/week at whatever distance can be completed in a time that doesn't impact the rest of one's training. This could be at a recovery pace initially and a tempo pace later on or a combination of the two. It wouldn't be an endurance runner's training but should allow development of greater running ability with lower risk and greater spin off benefits.