We pulled Olympic lifting coach Mike Burgener aside during the lunch break at a recent CrossFit certification seminar to teach Pat, of CrossFit Virginia Beach, to snatch. Pat's a very good athlete but has limited exposure to heavy Olympic lifting, especially snatching. Burg started him with PVC, expecting to breeze right through, but Pat made several little errors that needed fixing off the bat and was inconsistent in his movement. Burg rode him hard about them, making several essential coaching points along the way, including that athletes need to be ridden hard to nail technique from the beginning. He gets Pat through some basics on footwork and positioning, plus the Burgener warm-up in this month's video. Next month, Part 2 in the series will continue the lesson. 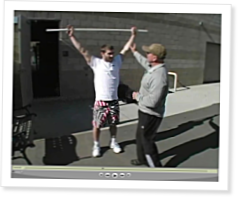 Fixing the Feet With Mike Burgener

How do you fine-tune an elite athlete to reach even more potential? Olympic-lifting coach Mike Burgener trains Danny Nichols of TJ’s Gym in San Rafael on the finer points of snatch… Continue Reading

I think Im ready to try to teach the Snatch. Coach Burgener does a great job of getting across the important info. Can you guys post a link to The worlds fastest lift?

any links on learning the snatch? i dont live near a box, and I'd really like to learn11