This month we continue working with world champion grappler Valerie Worthington. Valerie has trained extensively in both gi (wearing the traditional kimono) and no-gi grappling techniques and has chosen a few of her favorites to share with us.

Many jiu-jitsu schools, either because of size restrictions or because a large focus of the curriculum is on the ground game, do not spend much time working on takedowns. Frequently, grapplers interested in competing in submission wrestling (sometimes also called nogi jiu-jitsu) have to seek takedown knowledge from wrestling and adapt it to their jiu-jitsu game. The double-leg takedown we present this month is one of the wrestling takedowns Valerie has found to be useful in her matches.

Jiu-jitsu matches begin from the feet, with both opponents facing each other, feeling each other out for a takedown. One of the more common takedowns is the "double-leg" takedown, in which the attacking grappler shoots in, traps both legs of the opponent, lifts them off balance, and then drives them to the ground. 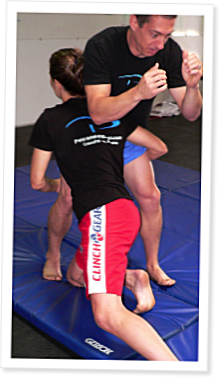 In boxing, when two fighters get in close to each other and lock up, the referee stops the fight and breaks them up. In other fighting arts, this position is… Continue Reading

The final leg of the journey of studying Brazilian jiu-jitsu involves the tools it takes, mentally and physically, to succeed in the long run. Earning a purple, brown, or… Continue Reading

While kicks to an opponent's head and one-punch knockouts might make for great highlight reels, less dramatic-looking punches to the body can drop an opponent with stunning… Continue Reading