"CrossFit women rock!" This sentiment resonates with both men and women. CrossFit women are redrawing the boundaries of performance and having a blast doing it. In fact, their awe-inspiring performances have been instrumental in conveying CrossFit's efficacy to the free world's military. It wasn't the male fire-breathers that did it. It was the women. As one Naval Special Warfare operator said, "It's easy to write off to genetics the performances of a CrossFit male, but it's a whole different ball game when a five-foot-nothing, high school pottery teacher at the local hippie high school cleans your clock." That statement continues to resound across the military and fitness world.

In this feature and interview, we learn a little more about Jolie Gentry, the winner of the inaugural CrossFit games. We already know she can run, lift, row, pull-up, and jerk with the best of them. Now see some other sides of her.

1. Explain your introduction to CrossFit.
Two Santa Cruz County Deputies I met at Basic SWAT school in September 2006 talked about this guy on their team who was "a machine" and just ran circles around everyone else on their SWAT team. They said that his name was Greg Amundson, and he does this stuff called CrossFit. They knew I was interested in fitness and said that I would probably like it. After I returned from school, my teammate Darryl told me that he had just started training at One World Gym in Union City where there was a cop who ran CrossFit classes. The first day I walked in the door, I realized that the cop he was talking about was Freddy Camacho. I've known Freddy for years. In fact, he had been a student of mine in a group cardio class that I used to teach at a martial arts school. 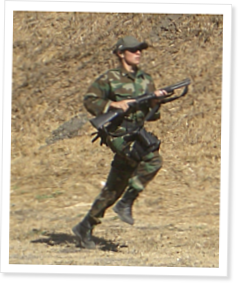 Kyle Maynard says that he has been doing things that people didn't expect him to do for a long time. Though he was born with a rare condition called congenital amputation… Continue Reading

Jolie Gentry, go get em girl! A women after my own heart. Your are and inspiration to all. Want a husband? MAJ Tschanz, US Army Reservist/Professional Firefighter

Hey there miss JOLIE...... you do ROCK!!!!! A true inspiration to all female crossfitters! I am somewhat new to CROSSFIT but I am soakin up every bit of it! I am headed to the Level l Certification this weekend in Dallas, TX...... wish me luck!!!

Can't wait to give the bear a shot after seeing the attatched clip.
Your performances are amazing.

Have they started doing a CrossFit women's calendar? Seeing the beach shots above of Jolie has got enquiring minds wanting to know ha ha!