Getting Started in Brazilian Jiu-Jitsu by Becca Borawski - CrossFit Journal

One of the most frequent topics of conversation I seem to engage in with fellow CrossFitters is about getting started in Brazilian jiujitsu. People want to know what to expect, how to prepare, how to combine it with their strength and conditioning training, and how to get better. To help answer these questions, I interviewed a panel of successful jiu-jitsu players to find out their take on how to start, survive, and succeed at Brazilian jiu-jitsu. This first article in the series focuses on how to choose a school and instructor.

My panel of experts

Jimmy Tang has been training in Brazilian jiu-jitsu, both with and without the traditional gi, for six and a half years. A frequent tournament competitor, Jimmy earned his brown belt from Jean Jacques Machado in 2006.

Kenny Florian is a mixed martial arts (MMA) fighter, Ultimate Fighter contestant, and top contender in the 155-pound weight division in the UFC. He has been training Brazilian jiu-jitsu for approximately eleven years and earned his black belt, in five and a half years, from Roberta Maia of Gracie Barra.

Valerie Worthington has been training for nine years. She earned her purple belt from Carlson Gracie and Carlson Gracie, Jr. Currently she trains under Johnny Ramirez and John Ouano at New Breed Academy (and she CrossFits at Petranek Fitness/ CrossFit Los Angeles). In 2007 Valerie won the gold in her weight division at the World Grappling Games in Antalya, Turkey.

Tait Fletcher trains MMA with Greg Jackson in New Mexico and is a veteran of the Ultimate Fighter television show. He has been training for approximately eight years, earning his brown belt from Eddie Bravo. 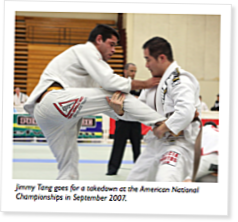