Gymnastics coach Jeff Tucker and assistant Jason Malutich take us through the intricacies of the L-pull-up and progressions for developing the strength and skill to execute it. They go over partials, assisted moves, spotting, negatives, and other incremental steps. They also scale it the other direction, showing progressively more difficult variations such as V-ups and weighted versions, for those who have already mastered the basic L.

Jeff Tucker (just "Tucker" to most folks) is a retired 20-year member of the Fort Worth Fire Department, where he served as a firefighter and arson/bomb investigator. He was head coach and director of Texas Christian University's gymnastics/cheerleading programs from 2001 to 2006, and he holds a multitude of degrees and certifications. He currently owns and operates GSX Athletics in Fort Worth, Texas, which specializes in Tae Kwon Do, gymnastics, CrossFit, and private athletic instruction. 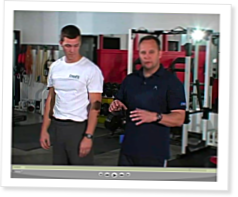 Keep your head up on the rings.

“Imagine Heather Locklear in a forest bathing under a nice waterfall or something like that,” Jeff Tucker says to a group of athletes at his … Continue Reading

Why Go to a CrossFit Gymnastics Cert?

What does a back tuck have to do with Olympic lifting or Fran?

According to Jeff Tucker of GSX Athletics, the answer is, “A lot.”

Why is the L-sit chin up so much more difficult?

Is it just because more muscles are activated?

Also, some chin movements flare up my medial epicondylitis, the L-sit chin does this after the first rep.
Am I pulling wrong?