Adrian Bozman of San Francisco CrossFit covers the basic pistol (one-legged squat), modifications, and assists. He teaches several progressions and tactics for working toward success, for those who aren't yet able to do a full pistol unassisted.

He also presents, and demonstrates, some more challenging weighted variations, for those who are already solid on the fundamental move: single weight in front, asymmetrical load, one weight on each shoulder, and one-arm overhead load.

Adrian Bozman is the head coach at San Francisco CrossFit. He has been coaching athletes, regular Joes, and anyone who will listen since 2004. 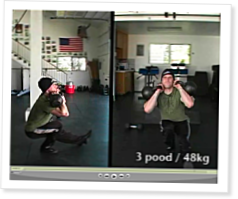 Join HQ trainer Adrian (Boz) Bozman for a peek into the Coaches Prep Course. In this video, Boz discusses programming heavy days and how to design a class around the WOD.

For a heavy… Continue Reading

This is the first part of Episode 3 of the Boz and Todd Experience. This session took place at Black and Gold CrossFit in West Point, NY on April 25th and 26th, 2009.

7 Comments on “Training the Pistol”

Boz, you are a freak. Someday I can only hope to be that strong. Thanks for the inspiration brother

The point about NOT relaxing at the bottom is very important. The day I started to hold tension the pain atop my knee went away.

Working pistols has been helpful for understanding my squat (as Rippetoe says to "connect my head with my ass". I disagree with Boz that the squat should be mastered first -- only because personally I found these so complimentary. I'm going to use them on a one of our guys that has a high deadlift and weak squat to see if it helps him too. Anyone else agree or disagree?

Very impressed with the quality of instruction from CrossFit as a whole.
I am a newcomer to the CrossFit community & want to let you know that the information you share via the internet is incredibly valuble & inspiring!

Great vid. I love pistols because they produce, not only leg strength, but balance and coordination as well. These components of fitness are far less challenged by normal squats.

Can someone provide some guidance as to how long it takes, on average, to progress towards full pistols (unassisted)? In starting this movement, my knees are screaming and it would appear that the progression towards the unassisted movement may take quite a long time. My intent is to push myself, but without injury. Any input?