I learned to squat a long time ago. It was 1977, and I had just been in a little altercation that convinced me that I might need to be in a little better shape than I was. I was an Early Adopter of soccer in high school (Texas, 1973-74, nobody knew what the hell we were doing, we had to buy the balls through the mail, football coaches thought we were girls, our soccer coach didn't know what he was doing, etc.) and had continued playing intramural in college. I was in decent "shape" in the sense that I wasn't fat, but considering myself then with 30 years of experience now, I can understand why I decided I need to train. I was a soccer player, for God's sake. I was not very strong. And although my little brush with violence had left me mostly intact, I was unhappy with the outcome. I decided the same thing young men have been deciding since there have been young men: I was going to get stronger.

A lack of strength had not been a major factor in the affair. The guy only hit me once--a sucker punch, really and actually--and I was not completely inexperienced in these matters. But I failed to whip his ass, and failures of this type usually demand a response. Being a relatively civilized individual, my response was not to drive by and shoot him, as the pussies of today seem prone to do. It was to begin a systematic overhaul of the person responsible for my failure to whip his ass: me. And usually these types of overhauls involve a realization that you're not as strong as a guy ought to be. Such epiphanies have for many decades been an important part of the gym business. 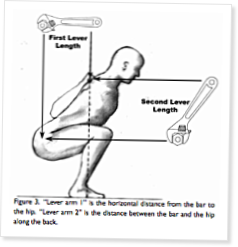 The Slow Lifts 2: The Squat

If we use the term… Continue Reading

In Part 2 of his series on the slow lifts, Mark Rippetoe calls the squat the key to strength and conditioning because no other exercise changes so many things about the body in… Continue Reading

The Squat and the Hamstring

Assisted by a mini-skeleton he calls Mr. Thrifty who “has seen better days” Mark Rippetoe discusses the importance of the squat and the hamstring. This footage is taken from a… Continue Reading

2 Comments on “Low-Bar vs. High-Bar Squats”

Thanks for the article. I had been struggling with squatting for a long time now( I even sprained my hip trying to get below parallel with heavy weights) but this series of articles(including "Active Hip" and others) instantly improved my squat form. I'm looking forward to working up to some real weight.

Amazing article with typical Rip humor. Too bad it's so lost in archives