In Andy McNab's bestseller Bravo Two Zero, a book about a famous British SAS mission in Iraq, the commandos use the term "hard routine" to describe their mindset, focus, and seriousness when at work. When they step into an actual mission, crossing the line of departure, they say that they go on the "hard routine." From that moment on, the rules are strict, the focus is singular, and all available resources are brought to bear with an intensity that is necessary for success. When they're on the hard routine, there is no room for selfishness, indulgence, compromise, or distraction.

This principle is required in special operations missions, where toughness, determination, and discipline are required for success and, often, survival. But there is a lesson here that applies to all of us, even in less dire circumstances. This lesson involves a principle, or a group of principles, that are as relevant to the workaday stiff as to the tactical operator--to ordinary people who fall anywhere along the spectrum of full engagement in life. The principles of the hard routine are broadly applicable, and, for the type of person who is willing to engage them, can be a powerful catalytic agent for change of all sorts. But what, precisely, is it? The hard routine is primarily an exercise in mental toughness.

As such, it is vital to grasp the component of psychology that permeates the hard routine. In any rigorous endeavor, the bedrock for success lies in the mindset of the individual. I am reminded of the story popular in the business world about burning boats. Alexander the Great, when he sailed into Asia, disembarked his infantry and then set his entire navy ablaze in the harbor. The only way home meant a march across land and through the enemy: victory or death. Total commitment. A potent psychological shift occurs when the possibility of giving up disintegrates into ashes. The hard routine grants the willing participant entry into a hard sanctum located in a lucid place of the mind, free of the "soft" psychological distractions and habits that can hinder sustained changes in action. In short, it boils down to denial of self-indulgence.

The principles of setting up a hard routine are simple. Following them is too, but it takes total commitment. 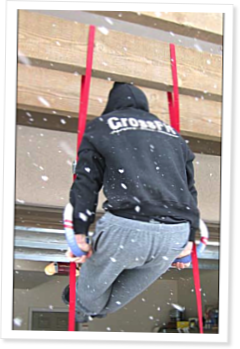 Old-school CrossFitter Darrell “Bingo” White explains why Bob Harper reminds him how much he loves CrossFit.

How can that… Continue Reading

15 Comments on “The Hard Routine”

This is my favorite CF journal article. This is how life gets lived!

Thanks, Adam. Good to hear some of this stuff is applicable. JD

Jason (or anyone esle who wouldn't mind responding), I loved your story. It really set in with me and has certainly inspired me to make some changes that I knew needed be made. Impetus comes from suprising places. I found it while trying to find stuff on the SAS on this site (there's some good stuff on the SEALs).

Anyhoo, I noticed "Hank" had to give up coffee?
Why? Why, Jason? Why would Hank have to do such a thing? I mean, there's always black coffee, or at least coffee without sugar? Good quality coffee -- arabica bean, espresso -- is loaded with antioxidants.

Great article, I'm going to give the 4 week plan a shot and go from there. Thanks for the motivation!

I agree. This is by far the greatest article CFJ ever produced. I have read it a number of times, but the sad reality is that it is easy to read but much more difficult to put into practice...kinda like Crossfit!

This is one of the most motivating articles in the Journal, thanks!

SO FRAKIN AWESOME! MUST DO NOW!

Hey Brother great article! I especially liked the Andy McNab reference; I read his book like 5 to 10 years ago. That mental attitude is sooo important!

Life is a mental event, fueled by heart, governed by inner rules, and completed by our physical expression. Follwing the rules and staying focused are really the hard part in a busy life. Keeping focused with all of the destractions and "entertainment". A book that really helped me alot was Mental Housecleaning by Tomas Picard. It took my focus to a WHOLE new place. Rockin' artical man!

Thanks for the book recommend, Jason, I'll check it out.

Real cool article. However as a serving member of the British Army I unfortunately have to say that "hard routine" is not what you describe it as. It specifically refers to light and fire discipline meaning that whilst under hard routine you are not permitted to smoke, cook or use white light. So all your food is eaten cold aka "hard routine".

Not taking anything away from the article though. It's mega!

Real cool article. However as a serving member of the British Army I unfortunately have to say that "hard routine" is not what you describe it as. It specifically refers to light and fire discipline meaning that whilst under hard routine you are not permitted to smoke, cook or use white light. So all your food is eaten cold aka "hard routine".

Not taking anything away from the article though. It's mega!

I find this article applicable to every area of my life, including my faith life. The last line that says "denial of self indulgence" is just like taking up your cross and following Christ. Denying yourself and living for a bigger purpose.

This article rocks. I discovered it from The Best Of article done by Melissa Byers Hartwig. I am already doing the Whole30 from Melissa's blog whole9life.com, but after reading this article I see where else I need to incorporate the hard routine. Thank you!!