"That was F-ing stupid."
--Eric Lundell after completing "SWAT Fran"

I'd say they were inspired. As anyone who works in public safety knows, there's an ongoing rivalry between cops and firefighters. We are always competing against each other, be it on a field, a diamond, an ice rink, a gym, or on the street. It's "anything you can do, I can do better"--to the max. So when a link to "Firefighter Fran"--a video of two firefighters doing "Fran" in full bunker gear and self-contained breathing apparatus (SCBA)--was posted with the Workout of the Day on CrossFit.com on May 4, 2008, the spirit of competition awoke in a couple of our local police officers.

Now, who in the police world is the alpha, the king of competition? It's the SWAT guys. If a firefighter can do "Fran" in turnout gear and SCBA, the SWAT guys must be able to do it in their tactical gear as well. And so they were inspired to complete the CrossFit benchmark workout called "Fran" in full SWAT callout gear. This included boots, BDU (battle dress uniform) pants, tactical vest, duty belt, firearm, helmet, earmuffs, and gas mask. In the vest were fully loaded magazines, flashbang stun grenades (you never know when you may have to bang something), ceramic trauma plates, radio, and night vision goggles. The gear alone weighed approximately 50 pounds, but it was the effects of the gas mask that were most significant.

The gas mask was an MSA Millennium, which is made for environments contaminated by chemical and biological threats. Inside the canister attached to the side of the mask is a series of filters for capturing harmful particles. 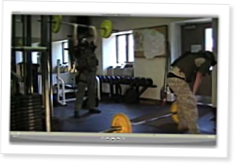 The work of a military fighter pilot is often described as long periods of mind-numbing boredom interspersed with short periods of stark terror....One of the ever-present threats is the effects of… Continue Reading

In February 2008 it was my privilege to serve as a member of the CrossFit HQ team that traveled to San Antonio, Texas, to work with members of the Warrior Transition Battalion from Brooke Army Medical… Continue Reading

In November 2013, the Oregon City Police Department lost an officer in the line of duty. That hadn’t happened in more than 100 years. As the new police chief in the small Oregon… Continue Reading