From Obese to Athletic: A CrossFit Success Story by Sue Lozinski - CrossFit Journal

From Obese to Athletic: A CrossFit Success Story

Just over a year ago, as I approached the age of 39, I was already looking ahead to the fact that in a year and a few short months I would be 40. I looked at myself in the mirror every morning on the way into the shower and hated what I saw. The scale, on some mornings, would reduce me to tears. Climbing up the thirteen stairs to my bedroom left me out of breath. This was no way to live. Something had to give. I decided that for a year I was going to try to lose weight "one more time." Once again, I would give it my all in an attempt to lose more than five pounds before I gave up and found my way back to the couch. I had done it before. In my early twenties, I lost fifty pounds on a steady diet of coffee, cigarettes and step aerobics, but I doubted that I could really do it the right way--with a proper diet and exercise. Even as I started to try, the voice in my head told me that wasn't really possible.

Nonetheless, I joined Weight Watchers and a gym and I walked on the treadmill and used the elliptical trainer three times a week. The weight began to come off slowly. While I walked I would watch the trainer at the gym working with her clients. This woman was very interesting to me. She had an intense gaze focused on her clients. She worked them hard. She laughed with them. Her energy was infectious. I was amazed when, one day, she had a woman in her fifties doing handstand push-ups. Deep down, I knew that if I was really going to lose weight and get fit, I needed to do more than walk on a treadmill, and I somehow felt that she was the person who could teach me how to really work out hard. After working up the courage to approach her, I was hugely disappointed to find out that she was leaving the gym to strike out on her own. She said, "Shoot me an e-mail and we'll figure something out." I took her card and we parted ways.

That was the moment when everything changed. 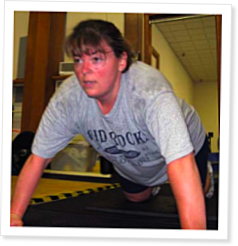 Training With Champions: Parts 1 and 2

By Mikko Salo and Dan Bailey

"CrossFit women rock!" This sentiment resonates with both men and women. CrossFit women are redrawing the boundaries of performance and having a blast doing it. In fact… Continue Reading

Find out what it’s like to train with 2009 CrossFit Games champion Mikko Salo and Dan Bailey, first-place finisher in the 2011 Reebok CrossFit Games Open, as filmmaker Sevan… Continue Reading

By Kim Malz and Karen Rackliffe

Karen Rackliffe is a 60-Plus Masters Division competitor from the 2011 Reebok CrossFit Games. She finished in fifth place. Her daughter, Kim Malz, was a Games competitor in 2009. In this… Continue Reading

3 Comments on “From Obese to Athletic: A CrossFit Success Story”

Great story and motivation for those individuals who are feeling the way you did before you found CrossFit. CrossFit is "it", I spread the word to those who will listen and I will use your story to motivate those who think they don't have what it takes to get started. I wish you continued success in your endeavors and future goals...CrossFit Rocks!

What an awesome story! I am very inspired by stories of CrossFitters like you who have come from humble places and made amazing strides. I hope that I will be able to use your story to encourage some of the women I know who are intimidated by the challenges of CrossFit. Continued health and strength to you!

What a great article!! my mum, who is 44 started doing the beginner workout a month ago and she loves it, and im so proud of her. Crossfit is so accessable and adaptable to everyone which is one of the reasons its so great! good luck in the future, and thats for such an inspiratational piece