Hello, I'm Steve. I started Steve's Club in May of 2007 in a large apartment complex located on the north side of Camden, New Jersey. Traditionally ranked as one of "America's Most Dangerous Cities,"

Camden can be a very rough place for a kid to grow up. It's a place that boasts a murder rate more than seven times the national average, despite occupying a total land area of only ten square miles. Daily life can prove to be an uphill battle. For a young kid trying to imagine a world outside of his or her own, the prospects can seem dark and bleak when violence and drugs are the orders of the day.

The cycle continues as kids are recruited at a disturbingly young age to begin a career selling drugs on the corner and rising through the ranks of the local gang. Any sliver of hope for a better future or "getting out" quickly gets washed away by the tempting allure of fast money, power, and the sense of belonging offered on the streets.

I can still vividly remember the first day that I lugged weights, bars, and equipment from my truck into the small community center room. As local commerce was bustling on that blazing hot summer day, the young kids on the corner (known as "hoppers") couldn't help but wonder what the heck I was doing. It wasn't long before two of the older kids walked over and showered me with questions. After I introduced myself and explained who I was and that I was starting a fitness program, the two kids just gave me a grave stare before turning away to resume their business. I pressed on. 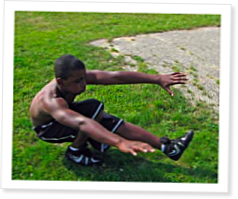 Beating the Streets With Steve’s Club

In May 2007, Steve Liberati opened Steve’s Club, a non-profit CrossFit affiliate for urban youth in Camden, N.J. His goal was simple: improve the lives of the area’s youth through… Continue Reading

“So when I found CrossFit, it was the perfect fit,” says CrossFit Radio host Justin Judkins, who is also the coach of the Maple Mountain Golden Eagles high-school wrestling team. “It brought to the… Continue Reading

“Just like adults, children love to be challenged every day physically and mentally. In my opinion, our program before CrossFit was not doing that,” says Jon Wilson, a PE teacher. Wilson… Continue Reading

This is what Crossfit is all about! Way to go Steve, what an awesome program you have brought to these at risk young people. This is real fitness, real healthcare--keep up the good work. Jim Rooks, MD member, Crossfit No Limits, Steilacoom, WA

Steve -
I am really impressed with what you do - thank you!

Thank you for doing what you do, Steve.

Just plain good stuff man. There is no higher sword to carry than that of actively changing peoples' lives. It's what a doctor does, and what you are doing Steve (and others) you are one in the same.

What an awesome program.

Great job Steve. I am passionate as well with helping underserved youth. I am going to look at doing something similar in CA. Any advice would be greatly appreciated.

Hey Matthew, did you ever start something in California? I'm super interested in doing something too! Wanted to see if I could help! alexajam@gmail.com

Steve if you need any funds to help with the kids of Camden come to www.myfundingplace.com we specialize in raising funds for good causes.