Working with kids has significantly influenced my beliefs about my role as a CrossFit coach. Designing and implementing appropriate programming for children and teens has really honed my general training skills. Unlike with my adult clients, who are responsible for making informed choices, it is not a child's or teenager's job to monitor my input and direction. There are special responsibilities inherent in working with younger populations. The kids I work with need guidance and boundaries, and they rely on me to help them make gains safely and wisely.

Connor and David were my first CrossFit Kids experiments. My son Connor started doing CrossFit workouts with me in November of 2003 when he was 12 years old. It was just something fun and challenging we did together--kind of a natural progression from our common training in Kenpo Karate. Connor immediately went at it like a bulldog, which became our CrossFit mascot at my gym, BrandX, and he regularly humbled me during the workouts. I posted regarding this on the CrossFit website in November of 2003: "Finished today's workout at 14:50. My 12-year-old son finished about 30 seconds faster. Just a little humiliating having your son stand behind you saying, 'Come on, Dad, you can do it.'"

That would become a way of life for me. Shortly after Connor started crushing me in workouts, his best friend David (13 years old) began to join us. That gave me two teenagers to chase, and it was then that things really began to get interesting.

David and Connor both possessed a natural competitiveness that made them embodiments of Coach Glassman's statement that "Men will die for points." Only these weren't men. They were boys. No deep voices, no surging testosterone, no adult muscle mass. Just kids with a desire to work and excel. I rubbed my hands together and chuckled. This was going to be fun. 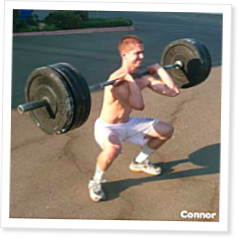 Josh MacDonald explains how he managed a host of kids for a no-parents evening at the box.

During some recent Crossfit Kids classes, we noticed that we always… Continue Reading

Daniel Rodriguez won the lottery when he was 13.

3 Comments on “The Inherent Responsibilities of Training Children and Teens”

Jeff, Mikki, congratulations on your fantastic program. Having come to know you more & more over the last few years, I am inspired to have my children learn from you and help you guys spread the kids programing. Crossfit kids is always welcome at our facility in VAB and I will do what I can to help you share your experience and system to the east coast.

I have some questions about training kids and young adults. Can you train them without being CrossFit Kids certified? Is it dangerous giving them a weight load before they are done growing? I understand that insurance is much more expensive and complicated when you advertise for kid training. My son is 4 and always wants to get involved so I will give him a workout of basic body movements like pushups, bear crawls, box jumps, Squats, burpees. Could that hurt him?

Gene,
On the CrossFit Kids website, www.crossfitkids.com, or just click "kids" in the above tabs, the FAQ page has links to the most recent recommendations from the American Academy of Pediatrics and other well known organizations, in support of weight training.

New policy , as of Nov 20 2009, states that CrossFit Affiliates must be CrossFit Kids Certified and Affiliated to train kids or teens in the CrossFit Methodology.
One of the many reasons for this is to ensure that people training kids have the answers to these questions you are asking and an awareness about the many differences in this population, neurologically, as well as physically.
Additionally all CFK Trainers are background checked annually.

Insurance does require additional coverage when you train kids, however ours was not much more expensive or complicated, ( grimler@nexoins.com)

Your son may scrape his shins doing box jumps, but can it hurt him-no. Encourage him, show him videos of other kids on the website, have him post what he is doing. Some day he will grow up and go looking for the local CrossFit Affiliate.