The Quest to Measure Fitness by Tony Budding - CrossFit Journal

The Quest to Measure Fitness

The question of defining fitness has been a challenge for the fitness industry since its inception. All the established certifying agencies have so far failed to produce a clear working definition. CrossFit's 2002 manifesto "What is Fitness?" was a groundbreaking contribution in both specificity and scope. In it, founder Greg Glassman described four models of objective standards for defining fitness.

Glassman since has more concisely defined CrossFit's results, and its definition of improvements in fitness, as "increased work capacity across broad time and modal domains." This single definition encompasses all four of his original models. The ability to accomplish all kinds (modes) of real work, at all time domains (from a few seconds of heavy or explosive effort all the way up to sustained activity for many hours) requires capacity in all ten physiological adaptations to exercise, all three metabolic pathways, and all the various hopper configurations; and will move you away from sickness on the continuum toward wellness and fitness. (See "What Is Fitness?" for further explanation of each of the four standards.)

Work capacity has two components: work and time. This is real work as measured by the accomplishment of some observable task. But fitness is not just about work per se. Increased fitness means having the ability both to get more work done in less time and to sustain high levels of work output for longer periods of time. In "Fran," the task is to complete three rounds of thrusters and pull-ups as fast as possible. As the time it takes you to complete that work decreases, you are becoming inarguably fitter (at least for that task). In a real-world scenario such as filling and moving sandbags to a levee in a flood, you are fitter when you can move the same number of sandbags in a shorter time (or more bags in the same or shorter time), period. Fitness, in this case, is simply the capacity to move more sandbags faster. 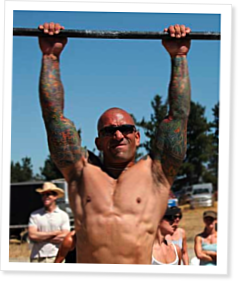 A Casual Exploration Into Ring Dips

A lot of ring dips look like some sort of suspended ab crunch. Are they legit? Tony Budding says they aren’t and brings in Jason Khalipa and Pat Barber to illustrate his point in this… Continue Reading

The charter of CrossFit is forging elite fitness. Our prescription or methodology for achieving this elite fitness is constantly varied, if not randomized, functional movements executed at… Continue Reading

Great article Tony. I've been searching for a way to describe CrossFit's relevance to the real world and your article does a superb job in doing just that!
Thanks.