All Other Things Being Equal: The CrossFit Fairness Doctrine by Paul Eich - CrossFit Journal

All Other Things Being Equal: The CrossFit Fairness Doctrine

Of the many issues cooking on the Workout of the Day blog and CrossFit forums, few have generated as much heat as the butterfly kipping pull-up (BFK). The debates over this movement have been warming ever since a video of a 2:19 "Fran" performance by Brett Marshall (aka "AFT") was posted on CrossFit.com in the spring of 2007. More recently, I remember a comment at a CrossFit event that pejoratively classified AFT's pull-ups as "snake pull-ups." Early criticism focused on the use of the split bars that permitted those "snake pull-ups." However, when AFT put up a second-place performance at the 2007 CrossFit Games, it was clear that his pioneering movement was not an impediment to his fitness.

In the CrossFit Journal, Issue 70 Tony Budding's delightful, hard-hitting analysis in "Capacity Standards and Sport" puts the question into perspective: "Proper movement technique is nothing other than the most efficient, effective, and safe means for increasing power and work capacity." So, what of the argument that BFKs are fast but don't increase fitness? In my book, that would be a valid criticism if proven, and a good reason not to do only BFKs. (If we follow CrossFit's prescription for variation, that should never be a problem anyway.) However, my sense is that the real driver for all the vented frustration over BFKs arises primarily from a completely different issue--namely that CrossFit, and specifically the sport of fitness as contested at the CrossFit Games, is not fair. (See, for example, the continuing heated discussions of the BFK--and of fairness, technique, measurement, and competition--in the main page comments on June 26 of this year, spurred by the imminence of the 2008 Games and the posting of a new 2:02 record "Fran" performance.)

Paul "Apolloswabbie" Eich is a CrossFit Level-2 certified instructor. He is in his nineteenth year of service as a Naval officer and has logged over 3,000 hours in U.S. Navy aircraft. Paul trains in his garage gym and at CrossFit Memphis. 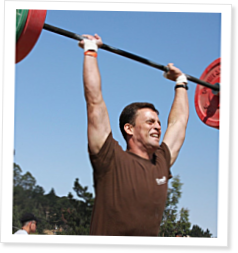 Forty Years in the Fitness Desert

When I started CrossFit, I was deployed and had been on what I thought was a good rhythm for working out. I had a regular schedule that varied between a focus on runs, a… Continue Reading

Paul Eich, a.k.a. Apolloswabbie, toiled many years in a wilderness of plyometrics shoes and Bowflex. In 2007 he finally found his way to the Land of Murph and Cindy. This is… Continue Reading

E.M. Burton muses on the nature of the CrossFit box.

A CrossFit box can contain an infinite variety of occupations, of uses, if not unknown and unknowable at least unpredictable.

16 Comments on “All Other Things Being Equal: The CrossFit Fairness Doctrine”

I don't like this new journal it is all over the place to read. We should be able to read the complete journal with one click.

A young girl goes to her favorite restaurant for years on end. One day she finds out that instead of being open only for breakfast it's now open for breakfast, lunch, and dinner! She laments, "how in the world am I going to eat that much food? I liked the old restaurant better!" You're that girl, Candace.

Dig around. Look at what's here. Put the brain in gear. I know you'll find your first reaction to be silly and emotional.

Did you read the article here? Were you able to follow Mr. Eich's train of thought?

As to the new Journal, I like it.
As to this article: Fair is not really a circumstance found in nature. Our survival and a species' dominance require rising above the rest to excel. As to Mr. Eich's line of thought, I hope to someday to be able to compete with him in the old guy who doesn't like to train too hard or eat too well category. For those of us without a chance of ever winning at the games the glory of competition does not fade from lack of trophies or medals.
As the old saw goes it is better to have tried and failed than never tried at all...

I'm with Candace...crucify me too.

I see this is an old thread...but yeah, whip me too. I enjoyed downloading the journal (and printing in out) at the beginning of each month.

is there video instruction somewhere on the butterfly pullup?

Regarding the statement "Crossfit, and specifically the sport of fitness as contested at the CrossFit Games, is not fair."

This is a very accurate statement with regards to the individual WODs as written. This is because of the variation in body types throughout our population. Let me give an example:

Two athletes perform Fran. The athletes have equal strength, meaning they can move the weight with the same speed. One athlete is 6'4" while the other is 5'8". Who finishes first? The 5'8" athlete.

This is because throughout the WOD, the shorter athlete has to perform less work than the taller athlete. Work = Force x Distance. If they move the weight with the same speed, they exert the same force on the bar. But the added distance for the taller athlete means he will fall behind. The same argument holds true for pullups. This does not take into account the lower mechanical advantage of longer limbs, so in reality, the taller athlete is moving more distance and using more force, if he is matching speed with his partner.

Now, if they are running a 400m, the taller athlete is most likely going to win because of stride length. He has to perform less work in the sprint and is therefore more efficient.

Is this a problem? No, this is the nature of sport. Now, for the Crossfit games, this is a problem if the competition favors certain body types over others. It is a difficult job trying to coordinate an event as frenetic as the games, so I am not criticizing. I am pointing out that in all sports, there are body types that are better suited than others. Usain Bolt wouldn't be that impressive if Olympic sprinting was limited to 50 meters and below. Micheal Phelps would make an awful power lifter. If the object of the games is to test overall physical ability, or lack of specialization, then more emphasis should be placed on creating a series of events that does not favor one body type.

Gabe, you do make a good point about certain body types being better suited than others for various types but your Usain Bolt example is not a good one. He would be VERY good at running 50M. There is a journal (out of South Africa I believe), called "Science of Sport" that did a breakdown of Bolt's various world record runs part by part. Essentially, the data shows that Bolt is really fast through every part of the race. For example, if Bolt were in the NFL combine and using electronic timing for his 40 his time would be 3.7 seconds. That's really fast.

However, that is beside the point, Crossfit is so incredibly varied that any person within a few standard deviations of average human size should have a body size that is "good" for Crossfit. The only people who are really going to have issues are those that are either really big or really small.

Send me an email if you would like a forwarded copy of science of sport.

Good tutorial. Took me about a week to get used to the movement and shoulder strain. Once you get the hang of it you can cut a lot of time off of WOD's with low rep pull ups.

Personally, I am starting to stray away from them. After awhile I saw that I was lacking more on my kipps and strict pullups. Also, it tears your hand to shreds if you go high reps.

I liked the article as well, good points as previously mentioned.

One item that I would like to add; I believe all CrossFit folks at the games or not fall into the 1% catagory. This is due to a willingness to work and suffer (in some cases really, really suffer) to make themselves as great as they can be. I remind myself when I get frustrated that nobody gets a CrossFit shoe contract & I do this to be the best version of me.

I thought Candice's comment was sarcastic, not serious. How the hell could someone expect to read the whole Journal in "one click"? I think everyone took her comment a bit too seriously? :)

Loved this article, because i've found myself whining about the class sizes getting too big, how it doesn't feel as fun as it used to because of the class size, too many 'strangers', etc. I'm just being a territorial ass and not focusing on what i'm there for...which is getting fit. And loving it!

I'm not going to whine about class size again. Thanks for the reality check and refocus.

I am confused here. The article began with a debate of how it is unfair to do butterfly kipping pullups in a timed competition and then digressed into judging the fairness of tall people competing against short people.

As for the first part, yeah, it's not fair and that's a good arguement. In any competition there should be clear rules and restrictions on how to perform the competition. Either allow the kipping or don't. If it's allowed, then it's only not fair if you can't kip, so I suggest you learn how to kip.

For the second part, the author is totally right. Things in competition, sports or just plain fitness(which should always be a competition) will never be fair. We cannot control that. There will always be someono who has an advantage over you, sometimes you will have the advantage. So just don't worry about it.

I agree! I just subscribed this week and I'm disappointed by how hard it is to navigate the content within the journal.

i think if they are moving the weight at the same speed, you are referring to power moreso than strength.

I love this article. I am a 5'tall, 115 lb. female. I just started Crossfit this week and have been laughing at myself trying to do wall balls - even at the lower target, and wondering how in the hell I'm ever going to lift the amount of weight some of these girls are. So being a competitive person, my first instinct was to say..."this isn't fair". But like the author said, it's not meant to be fair. It's meant to make you the most fit athlete you can be. And believe me...trying to keep up with 140 lb. women in Olympic weightlifting is definitely going to make me a better athlete than if I was separated off to lift with the other "small women". I hope they never implement weight classes at the Games.