The Muay Thai clinch is a dangerous position. It presents a variety of offensive opportunities in the form of punches, knees, and elbows, and it can quickly lead to a knockout. The clinch, sometimes also called the "plum," consists of one fighter controlling the head of his opponent, using weight and gravity against him, while delivering strikes to his head and body.

To begin, Tait Fletcher (with shaved head and tattoos in the photos), a veteran of the television show The Ultimate Fighter, and demo guy Andy Petranek are in the clinch (photo 1). Tait has his hands clamped on the back of Andy's head and is keeping his elbows in tight like a cinch on Andy's head. By grasping the back of Andy's head and not his neck, Tait is better able to maintain leverage over Andy and also prevent Andy from posturing upward. By keeping his elbows tight and pushing against Andy's collarbones, he can prevent Andy from moving forward. 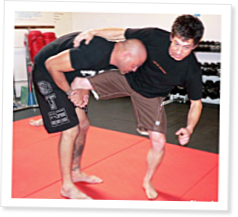 One of the most frequent topics of conversation I seem to engage in with fellow CrossFitters is about getting started in Brazilian jiujitsu. People want to know what to expect, how… Continue Reading