What is an Erg? by Judy Geer - CrossFit Journal

What is an Erg?

You may have noticed that the Concept2 indoor rower is often referred to as an "erg," and if you've listened to any on-water rowers talk about it, they probably call our machine "the erg" all the time. CrossFitters have been rowing long and hard, and last month, for the first time ever; "Row 2k" was the Workout of the Day. So, it's time to bring you into the inner circle. You've earned it. Call it the erg. The literal definition of ergometer is "a device that measures work," and this offers some insight into the intentions of Peter and Dick Dreissigacker, the founders of Concept2, as they developed their first commercial rowing machine. They wanted to offer an effective, realistic training tool for on-water rowers, especially for use during the winter months. It was important to them that the device be able to accurately measure work output and performance, so that rowers could measure their speed and distance as if they were on the water and track their progress--and so they could compare their own times across different machines and also compete with other rowers.

When the Dreissigacker brothers were developing their ergometer, the only other option available to rowing programs was a large, unwieldy, and prohibitively expensive machine used primarily for testing rowers. It was considered more of a torture device than a training tool. The Concept2 ergometer was a welcome improvement. It was priced right and easy to use, so rowing programs could purchase enough of them for training purposes, not just testing. It also quickly gained popularity for home use among both rowers and general fitness enthusiasts. (For a brief history of Concept2's development, see the company's Timeline web page.) In 1981, when Concept2's Model A was released, it was the first wind-resistance rowing machine to use a bicycle wheel for the flywheel, with extra weight welded on to provide the right amount of momentum to simulate the feel of on-water rowing. It was simple, but it worked. Bicycle technology was also used for our first Performance Monitor, which was in fact a bicycle speedometer. The Performance Monitor has come a long way since then, but even this early version allowed athletes to get a time or score for their workouts. Indeed, the first C.R.A.S.H.-B. indoor rowing race was held the next winter (1982), inspired by the new ergometer. Participants raced a distance of 6 miles on the speedometer.

Judy Geer was a member of three U.S. Olympic rowing teams (1976, 1980, 1984). She placed sixth in both 1976 and 1984; 1980 was the boycott year.) Since then, she and her husband Dick Dreissigacker (also an Olympic rower and co-founder, with Peter Dreissigacker, of Concept2 Rowing) have raised three children who are national-level competitive athletes in their own right. Judy continues to train and race in sculling, running, Nordic skiing, and biathlon. 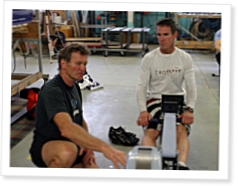 The Power of the C2 Monitor

So you’ve spent some time on the C2 Indoor Rower, but do you really know how to use the Performance Monitor (PM)? The power and accuracy of the PM are key in setting… Continue Reading

Some of you may remember reading Peter Dreissigacker's article here last winter about training for a personal record (PR) in a 2000m indoor rowing time trial. He also described… Continue Reading

From Rowing Indoors to Rowing on the Water

Would you like to hone your indoor rowing training to target the specific areas where you need it most?

Up here in northern Vermont the weather is finally getting warmer. The ice left the lakes at the end of April, and the water temperature is now into the 60s and… Continue Reading