A couple hours before the Women’s finals of the 2008 CrossFit Games, Gillian Mounsey chatted with Coach Mike Burgener. Gillian was in first place overall, but with only a three second lead over second place Tanya Wagner. The final event, which had been announced the night before, was 30 squat clean and jerks at 100lbs.

The video starts off with Gillian saying she intended to power clean the weight and then do a thruster. This was legitimate by the rules established, but was very inefficient. She explains that she had only done squat cleans on two occasions before and wasn't confident she could do it. Coach B insists she could and gives her an impromptu lesson in the squat clean. He also gives her some CrossFit-style tips for cycling reps faster.

Gillian finished the workout in 5:11 (5th best of the day), which was good enough to earn her third overall in the Games. Caity Matter had the best time of the day at 3:30, which was enough to win her the Games. Tanya Wagner took second overall with a final workout time of 4:40. 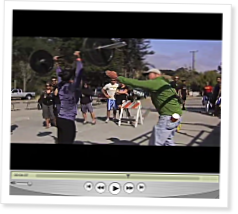 The Point of Explosion

“I thought it was right on,” Burgener says of the skills tests. In… Continue Reading

At the 2011 Summer Affiliate Gathering in Big Sky, Mont., Olympic-lifting expert Mike Burgener shares his coaching insight into the set-up and take-off positions.

The Burgener Files: 1 - The Warmup

In this first video of this series from … Continue Reading

Me too. In the last five minutes. I have learned about this then I ever knew before. Thx for sharing this. Gillian thx for asking for help. High five coach. Awesome.

sometimes it's hard to put into practice in your head what you just learned minutes ago and your on auto during the xercise. but awesome teacher and teaching! cause it's all about repetition.

My wife and I are going to the Feb 28th Oly cert in St. Louis.
I looking forward to 2 days of awesome coaching!

Thanks Coach Burgener for not only being a great coach of the olympic lifts in their intended use as a stand alone sport but also for your adapting of techniques to help CrossFitters in their sport, the sport of fitness. I have read many times from other strength coaches that the use of oly lifts for their football or basketball athletes is not to make them into Olympic Weightlifters but to help them improve the athletes in their given sport. We at CrossFit have the interesting and challenging dilema of being both proficient at the lifts in their purist form as well as using them as a tool to "improve work capacity across broad time and modal demands." Thanks again Coach!

Good video, question on the technique though. I always (myself, and when training my athletes) try to avoid doing the full squat clean at light weights because most people cut their extension short. Basically, watch Gillian's hips when she's doing the full clean, they never fully open. I'm wondering if this is going to cause problems in technique long term, or what is your guys take on this?

If though I end up prescribing the full squat clean, I usually have them do it with much less than maximum force (usually slower) but to full extension. So the bar still reaches the same spot as it would have if they didn't go to full extension, and they land in the bottom of a front squat, but the key being they still did full extension.

Am I wrong in this, or what?

Matt,
I agree with you that there are several form/technique issues with this video. But remember, Gillian is not a long term client of Coach B's. She is about to compete in a workout that requires squat cleans. Burg has a few minutes to try and give her some immediately practical tools. In that, this is an amazing display of coaching.

I also agree that not coming to full extension ("short-rooming" it, as we say in the seminars) is a major problem with lighter weights. Our solution is not to avoid the squat clean but rather to require full hip extension (eventually getting to the point of not counting reps that don't reach full extension). The power clean is used extensively in pure Oly lifting and sport environments for this very reason. It's not wrong. But, for developing real work capacity, the squat clean is far superior, so we're willing to work with folks to develop the full hip movement in the movement.

I think your strategy described in the second paragraph is ideal. It's called efficiency. It's not what you want for developing 1RM cleans, but it will give you the best possible approach to workouts with high rep cleans (say in Elizabeth). If you explode every rep with maximal force, you won't get your best time. You want just enough to elevate the bar, stand up with it, and go again.

You make an excellent point and I think Tony addressed it well.

To add to it, where flexibility allows I teach the snatch first, as this requires a greater explosion with less total load. I find that a larger explosion with less weight on the bar does the job to have them open the hips. I have my clients do a "jump shrug" as explosively as possible with the bar. Just saying "jump high" gets them to fully open the hips. The snatch drop and snatch land are also utilized during this time to get them comfortable with an unstable load overhead. We then progress to the full snatch.

Doing this before the clean variants has allowed me pretty good success and they are already comfortable exploding when the clean comes around.

Try it out and let us know.

Would dropping and catching the bar out of the bottom allow for the next fastest Grace time? Is it legit?

Tony, maybe I'm misunderstanding your post, but if the weight is light enough to power clean, isn't it more efficient to do so rather than perform a full clean? Isn't the latter just doing unnecessary work? Obviously the Games were an exception where the rules specifically required a squat clean, but in a real world situation, if I'm lifting something I can power clean, why would I squat clean it?

Chris,
Two different things are being addressed here. You're absolutely right in that if the goal is simply to get an object from the ground to resting on the shoulders, the power clean is indeed the most efficient path (assuming a light enough weight to power clean it). In that case, squat cleaning the light load would be doing unnecessary work.

In the Games, as in many CrossFit workouts, the exercise prescribed is squat cleans. The squat clean is required, so in this case, it's not extra work. The strategy discussed above is relevant for developing efficiency in sub-maximal, high rep squat cleans, not necessarily for maximal efficiency in moving the external object (which in other circumstances could have been power cleaned).