Rob Orlando is a CrossFitter with a strongman background. On October 15, 2008, he saw the challenge put forth by CrossFit Alexandria in a CrossFit.com video they titled “King Kong” [wmv] [mov]. The video shows Matt Okonsky doing a workout consisting of 3 rounds for time of:
1 Deadlift at 455lbs
2 Muscle-ups
3 Squat cleans at 250lbs
4 Handstand pushups

The video ended with “Anyone else care to try?” Rob responded with a resounding Yes! He ended up doing six rounds of the workout about 20sec faster than Matt had done the original three. Here is his story. 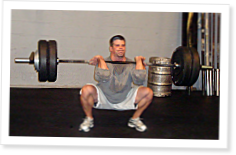 On the Mic with Rob

This is the workout that Rob Orlando writes about here. Rob saw the CrossFit Alexandria video on the main site of CrossFit.com and accepted the challenge. He did six rounds… Continue Reading

CrossFit Games competitor and strongman and Rob Orlando is known for his amazing feats of strength and his impressive work capacity. His performance in the 2009 Games as well as WOD demos… Continue Reading

Games On: Megan and Chyna

What better way to train for an upcoming CrossFit Games Sectional than with 2008 men’s champ Jason Khalipa and his coach, Austin Begiebing, cheering you through a workout?

Anything worth doing is worth overdoing—or so goes the saying. So why shouldn’t we find out who’s got the highest box jump?

A few questions for Rob. I am curious about diet. The drop from 230 to 200 is substantial. I was wondering if this was mainly due to a change from Strongman style workouts to a more intense training regimen (i.e. strongman training modified with Crossfit) or if he also made significant changes in diet.
Along the same lines, from what I have heard about strongman competition those guys eat a mess of calories, I was also curious how Robs' caloric intake changed with the crossover from Strongman to Crossfit.

Hi Aaron---First, thanks for checking out the article and vid. Second, my diet as a strongman was atrocious. I ate several thousand calories per day. Tons of carbs in the form of rice, pasta, bread, etc.. I also ate ungodly amounts of protein. Looking back I can see that it was just completely out of balance. I ate too much, too often, and all the wrong substance.

I went to a Level 1 cert in Utah in April and Nicole talked about diet and the importance of nutrition in relation to CrossFit performance. I took the information seriously. When I returned home, I picked up the book, "Enter the Zone" by Barry Sears and it changed my life. I read it cover to cover twice in a week. My diet isn't a perfect zone but it's close. Instead of a pile of rice and a slab of protein, it's much more moderate. I try to balance the macronutrients without measuring anything. I suppose that if I wanted to get really serious about setting records I'd start measuring my food.

Now I would say that eat 3 solid meals per day and several snacks, most of which are well balanced and zone friendly.

The CrossFit style of training was an easy switch from the strongman workouts....especially after I changed my diet. I felt like I could work harder, longer, without fading.

Hope this answers your questions. If you need to know anything specific, don't hesitate to ask.

Rob, thanks for responding. And yes, those answers were what I was looking for. In terms of specifics, I am not sure where to start, so I will be brief. I am trying to find the most efficient means by which to improve my overall load capacities (would love to eventually compete on one level or another). My resources are limited. I live in a remote fishing village in Alaska. My gym is spare and I max out all the available weight, which isn't much ( My CFT is maybe around 875 which rates as intermediate, been using Crossfit for about 8 months). I train alone, and will continue to do so for the next 7 months until I return to the states and go to some Certs etc. In your own estimation, and anyone else who reads this and is willing to chime in, what would be some good resources, essential training equipment (limited budget), or advice for making the most out of what I have available.
Right now, my bread and butter strength building is DL and C and J high rep mid range weight. No rack to speak of yet but am working on it. So, every lift (like backsquats) is off the floor. I also have a homemade weight sled I drag around a little gym.
Current Stats:
Fran 6:20
Cindy 19 rds
Grace 4:32
By the way, the video is great and your effort is certainly inspiring. I have been lurking on the Crossfit site for a while now and this is the first response I have posted to anything since I discovered Crossfit.
Thanks,
Aaron Fortner
5"11
220

Rob,
Great story bro. Lead from the front, that's a great way to be. And I am sure your clients have much more respect for you letting us all in on your journey. You are a beast. So you going to compete in the games next year?

Thanks for the info Rob. I have a couple more questions in hopes of helping my diet out. How many blocks of each do you eat for the zone? Do you time your meals and snacks at certain intervals? What do your snacks consist of? Thanks..