In a lighter discussion, Jim Baker, Mary Conover and Sally Stade, along with Tony Budding, talk about the term elderly, and give possible alternatives. Jim and Tony each received some unambiguous emails from folks who disliked the term, which was used in the first two of Jimmy's videos (Intro and Kathie’s Workout).

The term was placed there by Pat Barber, 22, who thinks that Freddy Camacho is old. The term passed through the editorial process unnoticed.

The conversation is partly serious, but mostly irreverent, as the four throw around technical terms like smoking seniors, sexy seniors, and recycled teenagers. 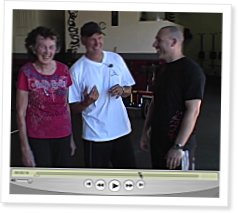 This is the third and final part of a complete training session that Vilma Siebers, 81, had with Jim Baker at CrossFit Santa Cruz Central, where he is a trainer and… Continue Reading

Jimmy Baker is 61, and has been training CrossFit for over a decade. He is a co-owner of CrossFit Santa Cruz Central. His youngest client is in her mid-fifties, and his oldest is… Continue Reading

This is the first part of a complete training session that Vilma Siebers, 81, had with Jim Baker at CrossFit Santa Cruz Central, where he is a trainer and co-owner.

whoa was that pat barber with the near hairdo and the beard?

Well, according to the younger folks in my USAF squadron, I'm "old as dirt". I'm only 51. They even dubbed me with the call sign of "FOG", (F@#$ing Old Guy). Definately not a "senior", but not a spring chicken either. Would guys my age fall under the category of "Masters"? Oddly though, I can out run more than half of the younger fliers and I can outlift all but one (power lifter, oly lifter, and sometime CFer). Metcon workouts...I'd kill 'em all. The last time one of the young gals referred to me as "old as dirt", I "box jumped" right on top of her desk and back to the floor. Didn't even muss up her papers. I asked her, "How old did you say I was?" She was unable to repsond.

I’ve enjoyed the Mary Conover-Jim Baker videos. Aging is a topic that interests me. I remember reading the article “Crossfit Grandma” and thinking “That’s exactly how I want to be when I get EVEN older.” It’s more than just exercise, it’s spirit. Mary, you got it! And Charles Pike’s comment- Thanks Charlie, now everyone knows what my email really means “judgefog at yahoo dot com”

I love the perspective of all interviewed, keep up the great jobs everyone!

I think it is great how organic Cfrossfit is. The title of the video series is being changed and discussed IN the video series. Too funny!
But seriously, I'm a 33 year old trainer and at least half of my clients in the last 6 years have been 60 and over. This video series has been great! Confirmation of what I've been doing right and some insight from people with more experience.
Thank you all!!!

Charles-
Thanks for that comment. I don't consider you old but I gotta tell you that I love hearing about people like yourself who take age out of the equation. Although I am only 33 I got a very 'late' start in my fitness. I was a fat banker through most of my 20's. I am now my fittest ever and my dream is to be more fit at 40 than now and more fit at 50 than 40.

I don't know whether or not anyone reads the comments of these older articles but I'll just drop this in.
I'm 66 and just passed my level one certification. My son, who is also my trainer, and an instructor at the Denver Police Academy, is opening a CrossFit gym, CrossFit Dominion and I will be training CLASSICS.
Anyone over 50 is a Classic, and don't let anyone tell you different.
My classes will be called CrossFit for Classics. I'm doing this as independent contractor under the tradename Fitness for Classics(tm applied for). I'm mainly looking for deconditioned clients who want to get fit, rather than fit Classics wanting to get fitter. They'd do fine in my son's section.
If anyone wants to use the title CrossFit for Classics for a program for over 50s, I don't mind as long as the trainer is also over 50 and the emphasis is on training de-conditioned Classics.