In this Part 1 The Press, Adrian Bozman explains the basics of performing the press correctly, including the role of midline stability. In this video, the press is taught primarily as a skill transfer exercise for the push press and the push jerk, which are much more athletic movements with significantly higher power generation. They are described in Part 2 The Push Press and Part 3 The Push Jerk.

For more detailed descriptions of the press as a specialized training drill, see these articles by Bill Starr and Mark Rippetoe. 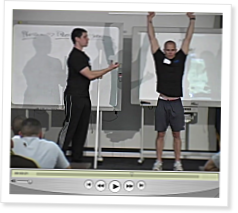 Adrian Bozman of San Francisco CrossFit covers the basic pistol (one-legged squat), modifications, and assists. He teaches several progressions and tactics for working toward success, for those… Continue Reading

This is Part 7 of the second episode of the Boz and Todd Experience. Boz and Todd, with special guest Chris Spealler, conducted four training sessions at Front Range CrossFit. Except for… Continue Reading

7 Comments on “The Overhead Series - Part 1 The Press”

i love when i got so straight up on a lift and hit myself in the chin! those are the best moments haha

i'd like to know how much boz can press!

On hitting yourself in the chin or having to 'go around' it in your presses or jerks: Look up. Put your eyes to the sky directly above your centerline and have your face turned up all the way as well. (Find a focal point.)
I was a competitive Olympic style lifter in college, and our methodology was to look up on cleans, jerks, and snatches. Trust me that when you have 300 pounds on your shoulders, you can not afford to send the bar on any kind of indirect path. (Truth be told, it's more about how your body jumps down directly to get beneath the weight.)
The idea of looking up on the snatches or cleans would be analogous to standing beneath a basketball hoop and jumping up to touch the rim. The looking up puts your body in the best possible alignment.
Try this at your computer. Put your arms above your head. Now look up. Do you feel your ribs lift and your chest solidify beneath your shoulders? Now, that's a stable centerline.

DO NOT fool with this without proper coaching, of course.
I bet if Coach Mike Burgener (sp?) saw this - as an old York Barbell man and a friend of Bednarski and Cameron, (hint, hint) he'd know who taught me this - back in the 80's.

Would looking up compromise the Thoracic spine? I understand the alignement beneath the shoulders, and I realize the load is supported by the active shoulders and scapula (supported by lats/traps), but it just seems counter to the constant montra of "unyielding midline" with a natural posture. I've got a HUGE nose that is now constantly scabbed from hi-rep push-press/push-jerk WODs, so I'm willing to try anything.

I never had a problem with any kind of thoracic strain. Again, you have to be sure you're doing it right, that in looking up and thinking you're straight you're not actually bending your back and overdoing it.

Here's another way to think about it: when you do a hand stand, either for push-ups or at the end of an inverted burpee, where are you looking? At the ground pretty much between your hands? In that case, you're looking 'up'.

Looking up is counter to what I've been hearing from Starrett and Paoli. Starrett preaches that it does compromise your thoracic spine and shuts muscles in the upper back off. Paoli advocates not looking at the floor while doing hand stand push ups but looking forward.

The bar path travels the same route from what I've seen in doing a hand stand push up. When you form the tripod with your hands (base of hand stand push up), that would be analogous to the bar (weight) being slightly out in front. When the weight is pushed up to its peak then it is over the mid-line.

Hope this makes sense, I'm still trying to figure it out.