In this Part 2 The Push Press, Adrian Bozman explains the basics of performing the push press correctly, including the essential role of torso angle. The difference between the press and push press is the powerful use of the hips to generate upward momentum on the barbell. Typically, 30% heavier loads can be used with the push press over the press.

Companion videos are Part 1 The Press and Part 3 The Push Jerk. 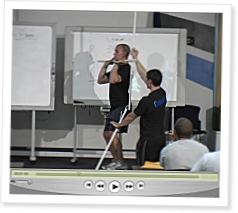 At the CrossFit Level 1 seminars, three overhead movements are taught together: The press, the push press, and the push jerk. All three take a barbell (or other object) from… Continue Reading

This is Part 7 of the second episode of the Boz and Todd Experience. Boz and Todd, with special guest Chris Spealler, conducted four training sessions at Front Range CrossFit. Except for… Continue Reading

Adrian Bozman of San Francisco CrossFit covers the basic pistol (one-legged squat), modifications, and assists. He teaches several progressions and tactics for working toward success, for those… Continue Reading

5 Comments on “The Overhead Series - Part 2 The Push Press”

not a big deal, but i happened to notice since i'm currently taking a stats course haha. don't mean to be a stickler

"You can press about 30% less than you can pushpress, you can get an increase of about 30%"

30% is pretty crazy actually. lets say you can press 200lbs for a 1 rep max. that means you can push press 260lbs, provided excellent technique?!

I'm curious where the 30% stat comes from? (Sorry Dan, not you) Was it actually tested and found 30% is "typical"?

Daniel and Miki,
Technically, Boz's statement was imprecise. We see good athletes with solid mechanics and competent hip drive able to push press about 30% more than they can press. This isn't a hard and fast number, but anecdotal observation. We also see an additional 30% increase from the push press to the jerk (or about 70% more than the press). I know that Pat Barber and Nicole Carroll are in this range. Pat's push press is about 35% more than his press and his jerk is about 65% more than his press. Nicole's jerk is about 80% more than her press. Chuck Carswell has a 200lb press and though he's never maxed the push press, he has done 245lbs x 3 and the other day he did a 275lb thruster (which, obviously, is a front squat push press).

These ratios can give you a ballpark assessment of both the quality of your mechanics and the degree to which you have potentiated the hip. If they are greatly different from these 20-30% increments, it might mean some remedial work is in order. Similarly, the ratio of overhead squat, front squat, and back squat can also speak to the quality of your mechanics. Well integrated athletes "typically" see a 20% increase from OHS to FS, and then another 20% increase from FS to BS. Anything greatly divergent from that might indicate a mechanical weakness.

Perhaps "typical" should be qualified with "for skilled athletes." Again, these are ballpark numbers not meant to be precise.

Maybe I missed it, but I would have liked to see some mention of bar position. In the press I don't think it is as crtitcal, but for the push press, I'm guessing that the bar needs to rest somehow on the torso before the dip,drive or momentum/velocity will be lost.

I just did the exercise after watching this, and I was able to rest the bar on my chest, just below collar bone. Couldn't reach deltoids with it. i hope this was correct.