The first CrossFit certification seminar took place from Monday, December 2nd, 2002 through Wednesday, December 4th, 2002. There were two participants, Ted Socha and Charlie Simms, and six trainers. For three days, they were pummeled with two workouts a day, plus hours of lecture on exercise physiology, movement theory, and the bases of real fitness. They were put on their return flight with a spatula.

In this lecture from Tuesday afternoon, Coach Glassman talks about defining fitness, its importance in focusing our efforts, and the shocking absence of a thorough definition of fitness from other programs and agencies. Then he covers the first fitness model, which he calls capacity at random tasks, but which many of you will recognize as the Hopper model.

This lecture took place at 2851 Research Park Drive, Unit B, Soquel, CA. This is the original CrossFit box. The wall holding the white board was torn down in 2003 to make the two-unit space famous in the many pictures and videos from 2004 to early 2008. 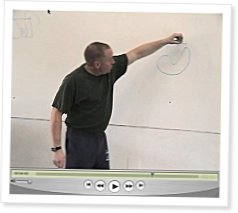 7 Comments on “The First CrossFit Cert - Capacity at Random Tasks”

"To the extent that you define your program-the chinks in your armor will lie outside of your experience." That was eye opening even though we've heard that said other ways. I have to put that up on the board tomorrow next to the Heinlein quote. Ready for anything and everything-that's pretty much the point and this footage really drove that home for me. Thank you.

So, should the WOD's be more random and varied? Do we see Fran too often? Should the "pieces" of Fran be modified more frequently (i.e. 28, 22, 7 for reps or load being varied...)? Should Fran show up 3 days in a row and then not again for 5 months? Should we program more variance more frequently? Does the notion that the main board has people posting that they predicted Fran (or the 10K or....) was coming give feedback that we are being too consistent? Does the overall feedback that Fran times are coming down consistently point to specificity?

What about injuries? Will we see more or less if we program more randomness?

Should we vary the 3 on 1 off more dramatically?

Just some thoughts. Loved the video and plan to play with some of the "randomness" concepts. Fascinating and impressive to see where things have gone in such a short time frame....

I have to think that there is quite alot of randomness to the wods (no matter how much people want to guess what is next), for instance recently Lynne came up three weeks apart which for the most part never happens. If you have workouts that are benchmarks, it would seem appropriate to have them weighted higher in revelance and get more face time. I kind of see the benchmarks acting as a means to measure the randomness and by throwing them in every so often it adds to the statistical knowledge necessary to forge ahead in a postive direction and to measure your success or failure.

Very interesting when Coach said (paraphrased), "How can you reach a goal (being fit) when you can't define what fit is?"

Also, mess around with randomizing exercises within workouts to create a random workout rather than just randomizing when a deterministic workout appears.

This very same lecture was used in my level 1 cert. I love CFJ it's like a Level 1 cert refresher anytime, anywhere.

I love this stuff.