In this Part 3 The Push Jerk, Adrian Bozman explains the basics of performing the push jerk correctly. The difference between the push press and push jerk is the aggressive landing in a partial squat with the arms locked overhead, which allows the hips to do almost all of the work in elevating the barbell. Typically, skilled athletes can use around 70% heavier loads with the push jerk over the strict press.

Companion videos are Part 1 The Press and Part 2 The Push Press. 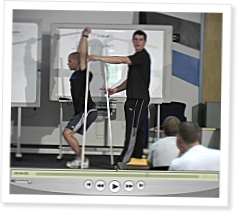 At the CrossFit Level 1 seminars, three overhead movements are taught together: The press, the push press, and the push jerk. All three take a barbell (or other object) from… Continue Reading

Join HQ trainer Adrian (Boz) Bozman for a peek into the Coaches Prep Course. In this video, Boz discusses programming heavy days and how to design a class around the WOD.

For a heavy… Continue Reading

7 Comments on “The Overhead Series - Part 3 The Push Jerk”

That was the most informative video I have ever watched. I have a big problem with generating power from hip extension and that helped a lot.

Loved this series! Very useful and hope to see more!

how much is chris PJing?

I learned a great deal watching this video. In particular, the short hip drive and the feet position were great points. Echo the sentiment: great series!

I second on wanting to see more. Perhaps you are planning to go through all 9 of the basic moves which would be great.

Great series, you just cant get better demo's. Anywhere. And it Boz obviouslys knows what he's talking about, check out the Freddys revenge video....!!