An Interview with Caity Matter - Part 1

Caity Matter of Rogue Fitness in Gahanna, OH won the 2008 CrossFit Games. She now works for Ohio State University as a project manager. Todd Widman caught up to her at the Schottenstein Arena, where she played and trained. The varsity women’s basketball team is practicing and training in the background.

She played 5 years of basketball at Ohio State, as a starter whenever she was healthy, and as captain her senior year. This is from her senior year roster profile:

Caity also played for the Charlotte Sting in the WNBA in 2005. And, over the past holidays, she just got engaged to Bill Henniger, founder of Rogue Fitness. Congratulations to both of you!

In this first of three interview videos, Caity talks about her background, as well as her CrossFit training in general and for the Games. 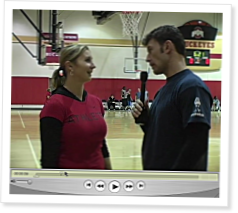 An Interview with Caity Matter: Part 2

An Interview with Caity Matter: Part 3

Caity Matter of Rogue Fitness in Gahanna, OH won the 2008 CrossFit Games. She now works for Ohio State University as a project manager. Todd Widman caught up to her at the … Continue Reading

Caity Matter of Rogue Fitness in Gahanna, OH won the 2008 CrossFit Games. She now works for Ohio State University as a project manager. Todd Widman caught up to her at the … Continue Reading

An Interview with Jason Khalipa - Part 1

Chuck Carswell is a presenter and head trainer for the traveling HQ seminar team for Level 1 and Level 2 certifications. He’s also an amazing athlete. He played cornerback for… Continue Reading

Jason Khalipa of CrossFit Santa Clara in Santa Clara, CA won the 2008 CrossFit Games. Tony Budding took advantage of his recent visit to get to know him a little better.

10 Comments on “An Interview with Caity Matter - Part 1”

Anyone else see the girl doing hang power snatches in the background of the weight room... better yet hang power barbell swings? Above parallel squats were also the norm.

Those are division 1 athletes... I wonder what they could achieve with a little efficiency.

Quicktime (.mov) version of this video is not working properly :(

nevermind! I just had to be super patient with this one for some reason. It doesn't start until it's fully downloaded. The numbers she was spitting out for lift maxes is ridiculous!

Big fan of Caity. Not only a great athlete, but a very down to earth, genuine and kind person. Look forward to seeing her put another great performance this year.

she's very strong! it would be cool to get some balling footage of her
breaking tod's ankles or something like that

She is definitely a certfied bad ass. Deadlift 330, clean and jerk 190. I think I might be afraid to compete against the girls at the crossfit games if that is what they are bringing. Love the competitive attitude.

Sidenote: how did they let a buckeye sneak into Ann Arbor? I hope she had to pay double :)

Go Bucks! Any OSU alum is already a champ in my book ~

I've had the privilege of working out with Caity at Rogue Fitness and let me tell you she is one of the most outstanding athletes I have ever seen.
We were doing a WOD that took around 20 minutes for most of us. She started 5 min after we did and finished 5-8 minutes before we did. It was surreal.
If the other women want to beat her this year they better bring some Kryptonite, if you know what I'm saying.

I went to high school in the same area as Caity... and remember her always being impressive in any activity she engaged in, I see that she has now only elevated her game! I recently just began my CrossFit journey and am already seeing tremendous gains, and it's inspiring to see someone from my area (small town USA) achieve so much! It gives me something to look forward to! Keep up the good work Caity! GO BUCKS!!!