In this part 3, Kelly explains the difference between primary stabilizers and emergency stabilizers (the latter are also the prime movers), before talking about the role of midline stabilization in the kipping pull-up.

This is the third of a series from Kelly on the theory and practice of stabilizing the midline in functional movement. 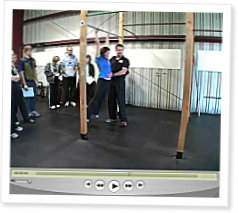 In CrossFit, performance is king.

Capacity in all 10 fitness domains will result in high performance and health, which Kelly Starrett refers to as an “ideal ready state.”

Speaking at a special… Continue Reading

KStar, Awesome three videos. You are extremely articulate and the message just gets across.

I hope to train at CFSF one day.

Thank you for sharing your depth of expertise with us. Very informative and helpful.

This was another great video, I love Kelly's stuff. Thanks!

I think there was a comment that strength will come with deads, squats, overhead presses, etc. I got the impression we are not to isolate and train these small stabilizers, but that through proper lifting and maintaining good form, these will improve.

Kelly is a phenomenal resourse...thanks for all your insight, and the comic relief is great (it really cements your point on correct allignment).